In which Erudite Partner raises up Cassandras for our time 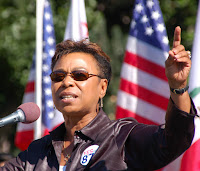 As the late, and unlamented, War on Terror drifts out of memory, Congresswoman Barbara Lee has finally been rendered some props for standing up on the floor of Congress in 2001 and warning that our rush to vengeance was simply wrong. She urged that we should not “become the evil we deplore.” We didn't listen.

For this stance, she can be compared to the mythical daughter of the king of Troy in Homer's Odyssey, the princess Cassandra, who warned that fighting the Greeks would end in destruction of the kingdom. She saw horror ahead. Nobody listened.

In 2003, nobody who mattered listened to the literal millions of people around the world who warned against the U.S. invasion of Iraq. George W. Bush crashed ahead into ignominy and failure.

Erudite Partner praises Barbara Lee -- and asks us to look around and listen to the Cassandras of our time -- in her latest essay for TomDispatch.