The Patriot Act is 20 years old

On October 26, 2001, President George W. Bush signed the Patriot Act, into law. (That's the "Uniting and Strengthening America by Providing Appropriate Tools Required to Intercept and Obstruct Terrorism [USA PATRIOT] Act of 2001" if you want to get formal about it.)

According to the ACLU:

Hastily passed 45 days after 9/11 in the name of national security, the Patriot Act was the first of many changes to surveillance laws that made it easier for the government to spy on ordinary Americans by expanding the authority to monitor phone and email communications, collect bank and credit reporting records, and track the activity of innocent Americans on the Internet. While most Americans think it was created to catch terrorists, the Patriot Act actually turns regular citizens into suspects.

In those fraught days after 9/11, American Muslims saw the new law as a gun aimed straight at their community. They weren't wrong; hostile surveillance and harassment have been a constant in American Muslim life over the last two decades. The law too often has been understood as a license for various law enforcement agencies to participate in putting these vulnerable Americans on notice that they are different and perhaps dangerous.

CAIR (the Council on American–Islamic Relations) has served as a leading umbrella civil rights organization for many embattled Muslim communities for the last two decades, as well as participated in broader human rights coalitions. For the occasion of the twentieth anniversary of the Patriot Act, the group polled American Muslims about whether they still felt under siege:

Overturning these unconstitutional policies, such as the disastrous watchlist system, is within reach if we work together, inshallah. 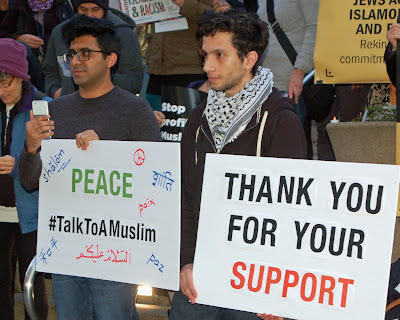