Who gets to be an American?

I think of mass post-Civil War immigration to the United States as founded in a radical definition of citizenship and then divisible into three periods.

The 14th Amendment (1868), passed to ensure the rights of formerly enslaved persons freed by the Civil War, established the basis for "birthright citizenship" -- if you are born in this country, you are a citizen. Our right wingers still don't like that. And this definition meant the children born to migrants here had unchallengeable citizenship.

In the later 19th century, there were the great southern and eastern European waves of desperate former peasants looking for a better life who were welcomed by the robber barons of industrialization as cheap labor. Think Ellis Island and large sections of East Coast and Midwestern U.S. cities where Italian, or Polish, or German served as the everyday languages for a time. This wave also brought many Jews escaping pograms in czarist Russia and imperial Austrian territories. 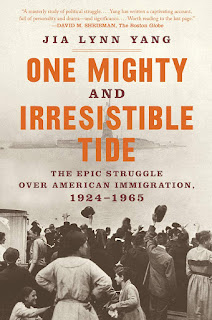 That migrant flow ran into a slammed door in 1924 when Congress imposed "national origin quotas" favoring northern Europeans and barring Asian migrants altogether. The aim was to radically reduce immigration and this more or less worked for forty years. Nobody in power was even thinking about Spanish speakers from south of the border -- many of whom came and went without regard for the system in this era.

Finally, in 1965, the Immigration and Nationality Act once again opened the doors to migrants. The multi-racial, multi-cultural fabric of the contemporary United States is the result.

In each of these periods -- including the present one -- there were the formal rules and also continuing pressure for changes, whether toward more restriction or more openness. There were loopholes which sometimes worked for some individuals. Or didn't. Congress occasionally made exceptions to its own rules. Quite often who got in and who didn't was a matter of luck, sometimes abetted by lighter skin color. Organized immigrants and their supporters agitated for changes. And the "system" began to look more and more like an incomprehensible crazy-quilt mess -- just as immigration policy does today.

Jia Lynn Yang, the national editor of the New York Times, chronicles that middle time, the era of restrictive national quotas, in One Mighty and Irresistible Tide: The Epic Struggle Over American Immigration, 1924-1965.

She's a story teller whose history is studded with villains. Senator Pat McCarran (D-Nevada) saw pretty much all immigrants as spies bringing godless Communism to the country. McCarran partnered with the racist Mississippian Senator James Eastland to stymie post-World War II liberalization to assist the masses of refugees -- "displaced persons," many of them Jews -- in the wake of the conflict and the camps. Yet in one of those oddments which legislative sausage-making can throw up, their anti-communist immigration bill removed the explicit racial exclusions that had been in previous laws and offered a 2000 person Asian quota. For this reason, the Japanese-American Citizens League threw their weight behind what was otherwise a viciously regressive measure. Yes -- immigration reform is tangled, difficult, and full of ugly compromises.

Yang also has her heroes. Presidents Harry Truman, Jack Kennedy, and Lyndon Johnson come off well in her telling. But her real heroes are the legislators -- New York's Emmanuel Celler in the House and Senator Herbert Lehman in the Senate -- who pushed relentlessly for a more open immigration policy. Their lot was a series of defeats, and finally a breakthrough, culminating the overthrow of the restrictive national quota system in 1965.

Her commentary on the reform finally passed is interesting:

The law's transformative impact would take years to reveal itself. Initially, as reform advocates had intended, the number of immigrants from eastern and southern Europe increased and surpassed the number of arrivals from the rest of the continent. But though writers of the law were committed to ending racial immigration quotas in principle, they had not anticipated that many more immigrants would soon be arriving from Asia, the Middle East, and Central and South America -- or that the law's own mechanics would encourage their numbers. ...

... It was not merely the types of immigrants entering the country that changed. The 1965 law also ushered in a return to mass immigration that had not been seen since the turn of the twentieth century. ...

... The people who fought for the 1965 Immigration and Nationality Act knew what it was like to live in a country that embraced a race-based definition of itself. They watched the grisly consequences during and after World War II, and they recognized that a nation with an immigration system built on racism could not be defended in an ideological war. But they also could not imagine living in a country as thoroughly multiracial as the United States is today. That means for those Americans who want ethnic pluralism to be a foundational value of their nation, there is unfinished work. The current generation of immigrants and children of immigrants -- like those who came before -- must articulate a new vision for the current era, one that embraces rather than elides how far America has drifted from its European roots. ...

Perhaps inevitably, Yang's history of mid-twentieth century immigration struggles elides what any of this meant to those even further down the country's oppressive ladder than the new immigrants -- native people and the descendants of the enslaved people for whom the foundational 14th amendment was written. They too are here.

The tone Yang has embraced in writing this history struck me as unusual on such a fraught subject. The adjectives that came to mind while reading were two: immigration policy often evokes judgmental assessments, but Yang seems always judicious. And throughout she is generous to her subjects, some of whom were simply corrupt and repulsive.

Amid political cacophony, her approach feels novel -- and perhaps wise. We'll all find out what her generation makes of our perennial American identity crisis.

Posted by janinsanfran at 8:01 AM