After Katrina: So now what? 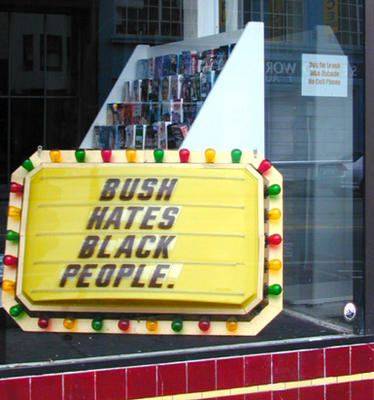 Sign in the window of a video store, two blocks from my house.

Yes, Bush hates blacks. Katrina has revealed this all too clearly. Here's some good commentary on the racism and the effort to wriggle out of responsibility for racism.

Bush also hates poor people, hard work and anybody who questions his façade of testosterone fueled bravado. He may not be quite the "worst President ever" as folks in the liberal blogosphere are fond of saying (we've had some doozies -- think Harding, for example), but he is close.

A great many people in the US like Bush's style.

If a majority of us think we should do better, how do we get there? I have seen no sign that Democrats know how to lead the country out of the Iraq quagmire; can they promise to rebuild the social solidarity the underlies emergency preparedness? Bush may be a useless horse's ass; the Republicans may be self-satisfied, selfish profiteers -- but who is going to change any of this?
Posted by janinsanfran at 9:32 AM