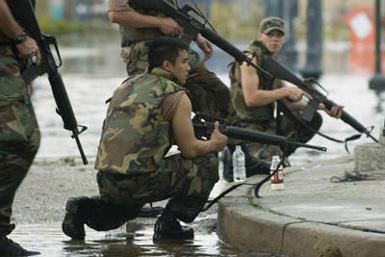 Louisiana Army National Guard soldiers take position outside the Superdome in News Orleans as they oversee security for the mass exodus of Hurricane Katrina evacuees from the Superdome to the Astrodome in Houston on Thursday. M. Scott Mahaskey / Army Times

I didn't really think I could feel any more outrage than I already felt about the criminal, racist, bumbling non-response by the US government to Hurricane Katrina's victims. Then I read this from last Friday's Army Times:

Troops begin combat operations in New Orleans
NEW ORLEANS — Combat operations are underway on the streets “to take this city back” in the aftermath of Hurricane Katrina. …

“This place is going to look like Little Somalia,” Brig. Gen. Gary Jones, commander of the Louisiana National Guard’s Joint Task Force told Army Times Friday as hundreds of armed troops under his charge prepared to launch a massive citywide security mission from a staging area outside the Louisiana Superdome. “We’re going to go out and take this city back. This will be a combat operation to get this city under control.” …

While some fight the insurgency [emphasis added] in the city, other carry on with rescue and evacuation operations. Helicopters are still pulling hundreds of stranded people from rooftops of flooded homes.

So this was the mindset of at least some of the troops going belatedly to "rescue" New Orleans.

We do know the military response wasn't all crazed. Lt. Gen. Russel Honore, commander of the First U.S. Army stepped in:

"Put those ... weapons down!," he yelled to troops rolling in on trucks. He repeatedly strode up to soldiers, and sometimes the local police, telling everyone to point their guns down, reminding them they were "not in Iraq."

I have to believe it made a difference that General Honore, the closest thing to hero we've seen in this squalid saga, is African American.
Posted by janinsanfran at 11:15 AM

I''m familiar with this subject too