Sutter to close St. Luke's Hospital?
Community asks where will we go? 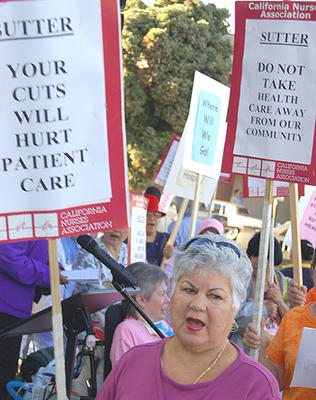 Sutter Health is a monster conglomerate that operates 26 hospitals and numerous associated clinics, home health agencies, a medical equipment company, and some insurance companies. Although nominally a non-profit, in 2003 it took in $465 million in excess of revenue over expenses. Nice haul if you can get it.

Three years ago Sutter absorbed financially challenged St. Luke's Hospital from the Episcopal Diocese of California. St. Luke's is the true opposite of a profit making entity. Founded by the Rev. Thomas Brotherton in 1871, the hospital had faithfully continued the mission he set it for 130 years ago:

St. Luke's doors are open wide for the reception of all colors, nationalities and creeds. Its benefits, refused to none, will be limited only by its means.

When Sutter took over the facility, the company promised the church and the city to continue care for low income area residents; aside from an imploding county hospital, St. Luke's was then and still is the only option left for medically indigent San Franciscans.

Now those promises look as if they are being violated. Despite objections from city officials and doctors, Sutter has closed the St. Luke's psych unit. They say it was underutilized; psych ward doctors say the hospital had reduced staffing to ensure that psych doctors could not admit, despite numerous calls from other overburdened hospitals.

[T]he low patient count in the unit was not a reflection of decreased need but due to a 'systematic reduction of MD staffing' that has prevented the unit from taking more patients and decisions by the hospital to not accept low-profit patients.

Dr. Lee emphasized that his former patients "have no where else to go." 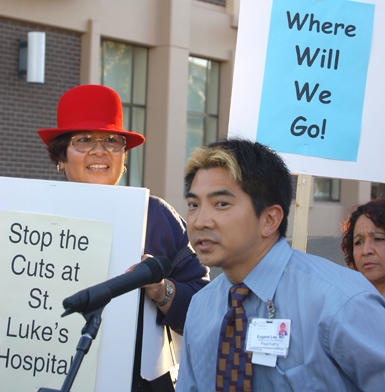 Community members and St. Luke's workers fear that this blow is just the beginning of a gradual erosion of the hospital's mission. Next on the block apparently is the Neo-Natal Intensive Care Unit; if Sutter closes that, who is going to choose to give birth a child in a place where a medical problem will mean shipping out the sick baby to another hospital?

The fear is that Sutter plans to merge the hospital with California Pacific Medical Center (one of Sutter's profit centers); this is well under way. Then patient care at St. Luke's would be gradually cut back, citing efficiencies in sending patients to other CPMC units. Finally, acute care at a gutted St. Luke's would be deemed too expensive, so the building would be turned into offices.

This scenario is completely plausible, since Sutter has inflicted a similar process on the former Davies Hospital, now barely a medical facility, just an annex of CPMC.

Yesterday, workers and patients insisted they would not submit quietly to the killing of Rev. Brotherton's dream. They marched and rallied at the hospital; and left the brief demonstration promising to be back. 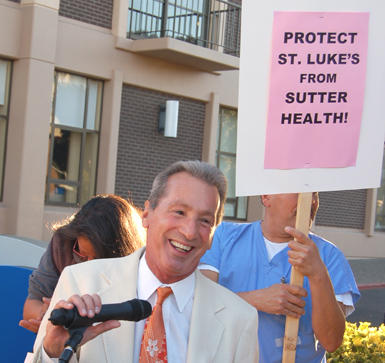 Supervisor Tom Ammiano cheered up the crowd, but also admonished Sutter: "you need a lot of things from the City and we know it." 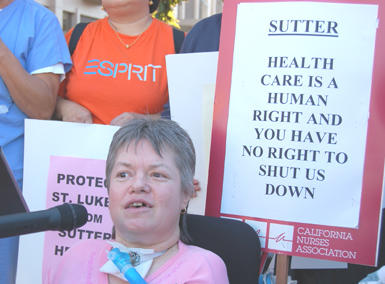 A patient had her own warning to Sutter: "you know where I live: right here. We know where you live." 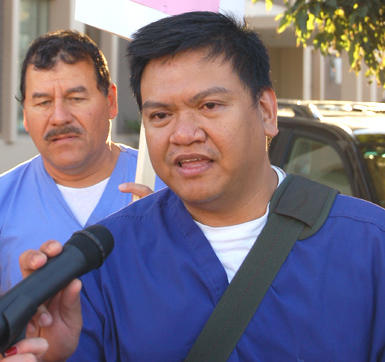 RN speaking: "I didn't go into nursing for the money; I do this work for my patients." 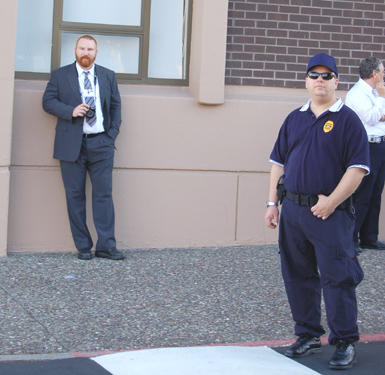 Not everyone was happy about the rally; Sutter's security stood by.

Posted by janinsanfran at 8:17 PM