What about Gulf Coast gays? 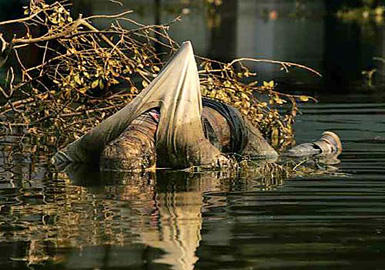 There has been no place to put the deceased, so many are left in the water. (Carolyn Cole / LA Times)

If my previous post on past fundraising for the Red Cross seemed to suggest that the "domestic partners" struggle was over, I'd be full of it. Gay victims of Katrina are still going to have a rough time getting their family ties honored.

The good news is that the Red Cross has a history of recognizing the needs of gay families in disaster situations.

The most effected states, Louisiana, Mississippi, and Alabama, all have laws that deny legal status to same sex couples.

The bad news is that FEMA's intervention might even make the situation of gay families more devastating. From 365gay.com:

The Federal Defense of Marriage Act prevents FEMA from providing any relief in the form of family benefits to same-sex couples. The laws also will directly impact gay and lesbian families where one partner has died as a result of the hurricane. Federal DOMA bars Social Security survivor benefits. State benefits would also be denied.

In cases where one partner is hospitalized the other partner would not be guaranteed visitation rights or any say in medical care.

Surviving same-sex partners even could be denied any say in funeral or burial decisions. Even in those cases where couples had legal documents such as living wills, powers of attorney or other agreements that could be valid in the states in which they were prepared and notarized there is no guarantee they would be honored in states where survivors were relocated.

We can only hope that so many heads will be rolling in FEMA that they forget to notice they have license to mess with gay folks.
Posted by janinsanfran at 10:03 AM

Thanks for this information I posted it to my blog