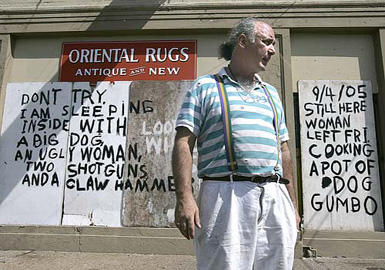 Bob Rue, owner of Oriental Rugs on St. Charles Ave in the Garden District of New Orleans, is hiding out in his shop, hoping authorities won't make him evacuate. The words on the front of his shop are meant to warn away looters. (Mark Boster / LAT)

Let's start with the awful stuff first. Katrina exposed our government's inability to perform its most basic function, enabling the people to survive and thrive, has been sabotaged by the ideologues of profit and privilege. Most of us are pissed.

So the right wingers have to deflect accountability for their failure. On one level, that just means Bushco will practice their usual stonewall. But additionally, their intellectual apologists rush to remind us that the real culprit is our underlying, nasty human nature. For conservatives, our main species characteristic is how bad we are. And our proper frame of mind is dread.

Here's Timothy Gorton Ash, of Oxford University and the Hoover Institution, warning today that we should expect to undergo "decivilization" in the coming century:

Remove the elementary staples of organized, civilized life — food, shelter, drinkable water, minimal personal security — and we go back within hours to a Hobbesian state of nature, a war of all against all. Some people, some of the time, behave with heroic solidarity; most people, most of the time, engage in a ruthless fight for individual and genetic survival....

Suppose there's a dirty bomb or even a small nuclear weapon exploded by a terrorist group in a major city. What then?... Almost having the force of a flood is the pressure of mass migration from the poor and overpopulated South of the planet to the rich North. . . . If natural or political disaster were to put still more millions on the move, our immigration controls might one day prove to be like the levees of New Orleans.. . .

New Orleans opened a small hole through which we glimpsed what always lies below.

It is so convenient: if we are all naturally rotten, how can screwing up be anyone's fault? I assume Ash is a Brit, so it is probably not right to call him "un-American," but that sure seems an accurate label for the guy. At our best, this country has thrived on hope in human possibility, on asking the best of each other and getting a lot.

"Nothing to fear but fear itself" -- FDR's first inaugural address; "Ask not what your country can do for you; ask what you can do for your country." -- JFK Those are the sentiments that have carried this country through crisis, not the doom and gloom hand wringing contemporary conservatives indulge in.

On to some good reporting -- LA Times columnist Steve Lopez is in stricken New Orleans; he's has some suggestions how we might approach disaster that seem more in tune with the better aspects of the national character:

President Bush promised to "lead an investigation into what went right and what went wrong." I think I can help shed some light.

If you pour money and manpower into Iraq, hire an amateur to run the Federal Emergency Management Agency and ignore repeated warnings of potentially disastrous flood problems, you're in trouble when a Big One hits.

It's all pretty obvious, so maybe Bush would also have time to take a good, hard look at the insurance industry. On my drive into New Orleans, I heard an insurance rep say he was sorry to have to deliver bad news to so many Katrina victims who thought they were covered, but found out otherwise.

Asked for an example of what's not covered, he said:

I say we round up all the looters and insurance executives and tie them to utility poles before the next hurricane hits.

Take a look. Lopez is no polyanna; the column revolves around the theft of his laptop while he was observing the rescue. He reports bigotry and greed but he does not erase hope and possibility.

We can't allow the conservative apostles of doom to trap us in hopelessness. This country can do better than the Bush guys have done on the Gulf Coast.
Posted by janinsanfran at 12:53 PM

A nurse that I work is from New Orleans. The majority of her family is in the area and she still owns her home in the Garden District (a well to do area on higher ground than where poor people live.

She is a very decent white women who was furious when she learned that aid packages (food,water,etc)
were dropped in her neighborhood long before poorer areas where the need was far greater.