On raising money for the Red Cross… 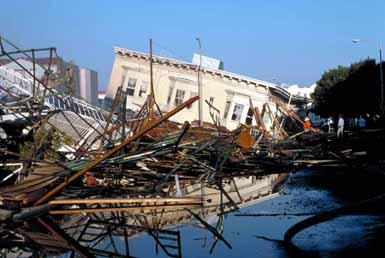 Not New Orleans: another disaster, in another time. USGS photo

If it seems a little odd that a diehard, pissed-off grassroots activist like me is raising money for the Red Cross, I agree it is odd. But when things are really bad, the big guys sometimes can get in the door before anyone else, so I think we have to help them now. Later, many of us had better help the little guys from New Orleans, like these good folks.

Meanwhile, this is a moment to get on record the absurd tale of the last time I was involved in raising money for the Red Cross. The year was 1989; the occasion was, naturally, a natural disaster: the Loma Prieto earthquake in Northern California.

That year I was employed in an electoral campaign seeking to win domestic partner benefits for unmarried San Francisco couples (yes, that means gay folks, but the ordinance was and is inclusive of any combinations.) The campaign was, frankly, a chaotic shambles. Our gay leaders had won a pioneering, if very weak, domestic partners law which created a registry that gave those who used it the right to visit their partners in the hospital and not much more. Our pro-gay mayor signed it.

Strange as it may seem today when the issue on the table is gay marriage, this pathetic effort was a shocking innovation at the time. Even in San Francisco, fundamentalists easily gathered enough signatures to force a referendum on it. So there we were, urging a "yes on measure S."

This might have been a good educational campaign, except that our political leaders had neglected to do the educational work to build a base for the new concept of "domestic partnerships" either in the gay community or among straight liberals. The idea was unheard of: lots of gays feared it was an effort to assimilate them to heterosexual norms or simply to make them responsible for their partner's debts (a big issue in a community where 50 percent of men were HIV positive.) Nobody else had ever thought about it. And suddenly we were faced with defending an unwanted "victory" at the ballot box.

I was responsible for precinct organizing in the campaign. It was close to impossible, the only time I've ever had a 100 percent "flake rate": no one who said they would volunteer to walk precincts showed up, week after week. Our issue simply wasn't important to or understood by the population of people who usually work on liberal campaigns.

And then the quake struck; though most parts of the city had little damage, a freeway pancaked in Oakland, part of the vital Bay Bridge collapsed, and large fires burned in some San Francisco neighborhoods. At least 67 people were killed. We were indeed shaken.

But those of us working on "Yes on S" still had a campaign to run. Electricity was out and folks were hunkered down, but the next day I drove around the Bay and picked up 50,000 flyers donated by a printer in Fremont on which were listed all the relief resources in the city. And then we called through the "Yes on S" flakes, turning our next weekend precinct walk into an opportunity to carry the flyers to the neighborhoods and collect money for the Red Cross.

This project was a raving success -- 50 people went door to door, met a great reception, and came back with envelopes full of cash. Fortunately, my partner was both an accountant and a former cashier, so she took charge of counting the money; it added up to over $20,000. The campaign had no facilities for keeping that kind of cash, so we took it home over the weekend and hid it under the bed.

On Monday we brought the large cardboard box with the cash ($20,000 in mixed small bills is a lot of cash!) into the office. With the office manager, we carried it down the street to the campaign's bank. Once we saw him into the bank, I went back to the office. A little later, there he was again -- still carrying the box. Wells Fargo had refused to process so much money and he wandered around Market Street trying to figure out what to do before coming back with the loot.

To be honest, I can't quite remember what we did next -- but somehow the money was turned into a cashier's check that someone being a public face for the campaign presented to the Red Cross on a Geraldo Rivera broadcast. (Yes, we got Geraldo; for an unvarnished video exposure to his reaction to the Superdome hell this week, see Crooks and Liars here.)

Oh yeah, three weeks later, the voters of San Francisco turned down domestic partnerships, narrowly. The next year, after more preparation, the concept was on the ballot again and won. It took a third vote the following year, fighting off fundies who wanted to repeal it, before domestic partnerships became settled law here in Sodom by the Bay.
Posted by janinsanfran at 9:43 PM