Baghdad by the Gulf: from occupied New Orleans 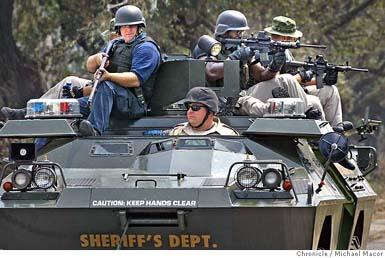 Members of the Louisiana Sheriffs Task Force go on patrol through the streets of the Uptown neighborhood north of downtown New Orleans. Chronicle photo by Michael Macor
Guess they've put down the insurgency, and retaken the city. A San Francisco Chronicle writer, Peter Fimrite, reports from under occupation:

New Orleans -- I did not actually count the number of automatic weapons pointed at me, but there were at least five, and I was certain they were all locked and loaded, or whatever that military phrase is signifying that a gun is ready to blow a hole in somebody….

I must have been quite a sight alone out there on the darkened New Orleans street wearing a headlamp and holding a cell phone at an odd right angle, the only way I could get it to work. I had just been placed on hold.

"I'm a journalist working for The San Francisco Chronicle," I said quickly, trying to remain calm. "I'm out here because the signal ...."

"Step out here!" he interrupted, and his tone suggested that the consequences for not stepping out into the street would be dire. I stepped out.

Okay, so you have inexperienced part time troops on patrol in an eerie devastated city; naturally they are a little scared. Maybe they over reacted? After all "there are National Guard, police and Army checkpoints every few blocks. SWAT teams, soldiers and military squads from as far away as Puerto Rico patrol the downtown streets, stopping anyone they see."

No -- the armed posse was a New Orleans police department SWAT team. Fortunately, for Fimrite, the Chronicle had hired its own muscle: a squad of bodyguards led by Chris White, a former Navy SEAL, to protect the house and journalists, "presumably from looters, but also from arrest by police or the military."

"Don't point your f -- gun at me!" White shouted, and an already tense situation turned into a hair-raising standoff….
"That was totally unprofessional, pointing their guns at us like that," White complained when he returned. "The Army has been patrolling this street for a week, and they know what's going on here. All the police had to do was ask them, and they would have known everything they needed to know about this street."

I guess the disaster is properly militarized now.

People can be approached as potential heroes and heroines who will help themselves and those in need. The national and international outpouring of help, the thousands of medical workers who have flown in, these people show that disaster can evoke in the best in us as well as the worst. The country must get back to knowing "there is nothing to fear but fear itself" or we perish in our own toxic stew.
Posted by janinsanfran at 10:03 AM