Arnold is for sale! 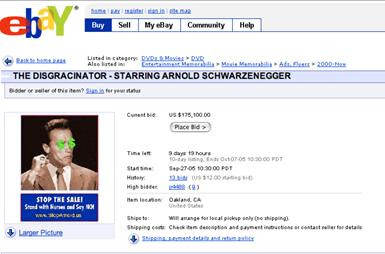 For a little while today, this ad really did appear on eBay -- all too briefly. I guess eBay didn't want to make a political point for the California Nurses Association who put up the item. You can see CNA's version here.

In 2003 Californians recalled Governor Gray Davis in part because he broke all records for political fund raising. Now Schwarzenegger is desperately begging corporate donors for more and more millions to try to salvage his unpopular initiatives in the special election he is putting the state through this fall. I wonder what he is promising them?

Last week he announced, six months early, that he will run for re-election next year. The Secretary of State won't even accept gubernatorial filings until February -- I guess he had to reassure the fat cats that he won't pull out after they invest in him this fall.

Yes, Arnold is for sale -- but the people of California aren't buying.

Full disclosure: I am temporarily working for CNA; because I got the email to staff, I was able to capture this screen shot before eBay pulled the ad.
Posted by janinsanfran at 9:51 PM