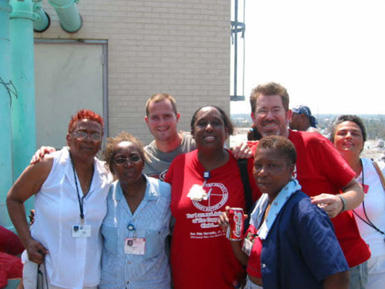 Auryn24' coworkers just before the helipcopter finally lifted them out of hell.

I keep thinking I'll write about something besides the hurricane. After all, I am thousands of miles away and not materially affected. What right have I got to litter the internet with this stuff? But I can't get the stories out of my mind. Here, I am just going to point to a few that are haunting me.

From "autryn24," an account of survival inside Methodist New Orleans East Hospital where she worked as a nurse.

On the night the storm hit:

When i got to the end of the hall, MaryAnn was screaming for us to get the patients out of the rooms and there was an 80ish year old lady laying in the middle of the hallway, pale as can be, looking dead (she wasn't, she was breathing) and her husband (?) laying over her and crying and screaming. A nurse came up to me/us and was out of breath and shaking and crying and pointed to another room and said "there's still a patient in there."

I ran to the room and tried to open the door and I COULDN'T BUDGE THE DOOR. It was sucked shut. Steven and Chuck came up to me, forced the door open, braved the torrential winds and got the light fixture/roof/ceiling off of the patient and rolled him out in his bed. The patient was out of it, but appearantly this was normal for him. He was NOT hurt. Come to find out the lady on the floor almost got SUCKED OUT OF HER WINDOW. Her window exploded out due to the pressure, and she was sucked toward the window, and her husband grabbed her and kept her from flying away. Jesus Christ.

That was before things got bad.

Two days later, still without any sign of rescue:

We watched the patients take their meds with just a small sip, and told them that the water had to be conserved throughout the day as much as possible. … We would all discuss the fact that we would only make about 50 cc's of urine a day, and when we DID pee, it was a moment worthy of applause.

Food was also scarce. … I didn't need to eat, but our men and smaller staff needed to. I made jokes about us starving, and for them to kill me because my fat self would feed everyone for weeks. Morbid, huh? We all talked like this. I completely lost it one day because I catnapped and had dreams about dying at Methodist. I cried, the staff cried. …

During these days, I saw a dead body floating past the hospital. I mean, I've seen LOTS of dead bodies, but none that were because of a disaster. It hurt. It scared me. Maybe that would be me?

Read the whole story. She got out, but her life is a shambles.

From Robert Davis, a USA Today reporter, writing about "Treating those left behind," in the New Orleans Convention Center:

I came here as a reporter but as a former paramedic, I didn't have it in me not to try to help these people. I go in with about 20 paramedics. …

The scene that awaits us is like something out of a big-budget disaster film. There is a murdered man lying out on the street, his throat slashed, a pair of scissors lying next to the body. A block away, a body of an elderly man is lying in the median. Both bodies are covered with blankets.

As we walk in a line towards the center, a remarkable thing happens. Seeing the blue EMS shirts, people start to cheer.

The guards may have been wearing bulletproof vests but the paramedics found what they usually find in volatile situations: Once people realize that you're here to help, they don't mess with you. Even the most violent thugs have seen their friends helped by paramedics.

"I'm still not sure where I am - what do they call this, the upper West or something?" said Shelvin Cooter, 30, one of 583 people relocated from New Orleans to a National Guard camp here on a sagebrush plateau south of Salt Lake City, 1,410 miles from home.

"We're getting shown a lot of love, but we're also getting a lot of stares like we're aliens or something," Mr. Cooter said. "Am I the only person out here with dreadlocks?"

Posted by janinsanfran at 9:48 AM

Thanks for these stories -- first time I've seen them. Inspiring and heartbreaking.

Thank you for posting my journal. This has been tough for me, but I want everyone who has no idea what we went through to know. Thank you.