Katrina for the undocumented means hiding and working harder 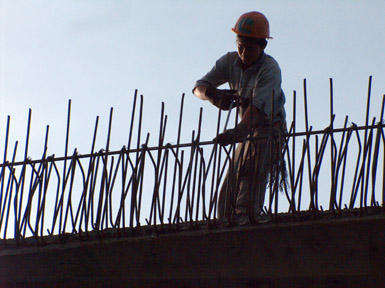 Recent weeks have been a revelatory experience for much of the mainstream media and through them for many middle class US white people: the hurricane laid bare the extreme poverty in which many African Americans pass their lives. Further, it reminded the nation that Black-White is our historic paradigm for understanding "race" in our collective lives.

But New Orleans and surroundings had many residents from other non-white groups; what happened to those communities? Here's some reporting beyond Black and white:

Illegal immigrants afraid to get storm aid:
Some sneak into shelters at night and then slip out in the morning, praying they won't be noticed. Others avoid government help altogether, preferring to ride out the chaos and destruction alone in a foreign land.

For illegal immigrants, the aftermath of Hurricane Katrina has meant not only living without a home, money or belongings, but also steering clear of the government officials who have flocked to the area, for fear of deportation.

Somewhere between 20,000 and 35,000 undocumented persons, mostly of Mexican and Central American origin, lived in the path of the hurricane. Many did not evacuate; "four roommates - three Mexicans and a Honduran - decided to ride out the storm in their trailer in Marrero. They were asphyxiated by a faulty generator after the storm passed."

Those who weathered the storm looked for informal resources they could trust:

Where Have All the Hondurans Gone?
…in Houston, when the first of Katrina's Honduran evacuees trickled into town, most didn't go to the city's public shelters, the Honduran consulate or to the Astrodome. Instead, through a network consisting mostly of word-of-mouth tips, many found their way to El Coquito, a Honduran restaurant.

Not surprisingly, Latinos are concerned that this gesture is just the prelude to the usual practice of using up and throwing away imported workers:

So undocumented Latinos, if you speak English and can read this, here’s the deal: You can go along on the underpaid, exploitation-filled work gangs to clean up our American city of New Orleans, and your employer won’t be in danger of being prosecuted (for 45 days, anyway). But tengan cuidado: if someone decides to report you, you may have to turn in your rags and dust masks, and stop cleaning our country and head back to yours. Que Dios os bendiga.

Posted by janinsanfran at 2:11 PM