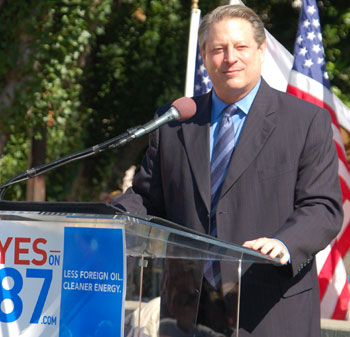 Some states have functional legislatures and folks there probably don't think much of them. Here in California we have a state government hamstrung by decades of rightwing pseudo-populist ballot measures, so we govern by initiative. (And we also don't think much of our legislature.) Prop. 87 is a California classic: it aims to enact policies to encourage use of alternative fuels and energy efficiency using proceeds from a per barrel tax on oil produced in the state.

The oil industry is spending some $78 million on spreading the usual arguments against any initiative: the measure costs too much, goes too far, and is too complicated. People we are supposed to identify as firemen and other public servants (but are probably actors or hacks) tell us this on TV, constantly. Proponents are spending only slightly less money to make sure we know that former President Clinton and former Vice President Al Gore say that Prop. 87 will make us less dependent on foreign oil, reduce air pollution and asthma, and help develop wind and solar power.

As of a couple of weeks ago, the No side's ads seemed to be working, showing Prop. 87 only 3 points ahead. This seems quite a triumph of money, since people hate the oil companies. And well we should; it turns out that, despite all their bleating, California is the only oil producing state that doesn't levy a tax like the one proposed. I sure hope the voters figure this one out and don't get scared off by big oil.

However, the real subject of this post is not Prop. 87, much as I hope it wins, but Al Gore's appearance at a rally in Berkeley today.

In my professional role training community groups to work on elections, I put a lot of energy into discouraging the urge to hold rallies. In electoral terms, it doesn't matter a hill of beans if you got 200 or 2000 supporters to turn out to cheer your candidate or position if you don't collect their names and contact information and get some work out of them. The Yes on 87 campaign did pretty well at getting the names by insisting that we give them up on their website in order to get a "ticket" to get into the Berkeley event. I trust I'll be hearing from them daily. And they also didn't give a damn whether people actually produced the "tickets" to be part of the crowd, a wise choice that filled the audience with folks on their lunch breaks and high school students.

I'd never seen Gore in person before. I had seen An Inconvenient Truth and been impressed. But I wasn't prepared for how effectively Gore presents himself -- perhaps as a future president? His rap [as paraphrased from my notes]:

The United States borrows vast amounts of money from China; sends that money to the Middle East for oil; burns the oil and pollutes our air; and thereby contributes massively to global warming. ...

It is right to say that climate change is a "planetary emergency." It is as if the earth was a child with a fever. The fever isn't going down, it is going up. The doctors, scientists, tell us it won't just go away. We have to do something about it....

We do not have political problems that keep us from acting. We have a moral problem. We face a moral imperative to act against global warming. This imperative is much like that which faced people in the last century when confronted by fascism. They rose to that challenge and there were good outcomes that they had never foreseen, including the United Nations and the European Economic Community. We can do as well responding to the challenge of global warming.

I suspect that last bit might include something about triumphing over communism when he gives it outside Berkeley.

Gore is a pretty effective speaker, at least in person. I wonder whether his seriousness might come across as angry on TV -- in person, he exudes strength. Gore preaches. He proposes a moral vision and promises moral leadership. We're not used to hearing this from a Democrat.

If Gore throws down for the presidential nomination, I think he'd be formidable. The high school kids next to me ate it up -- there are millions yearning for leadership that asks them to rise above the grubby realities of this failing empire. They hate Bush and more vaguely "the Republicans" but they are want desperately something, someone, to be for. They threw down in 2004 for Kerry as "not Bush," but they could get excited about a candidate who challenged them. Gore is speaking to this hunger.
Posted by janinsanfran at 10:47 PM

I've long been an enthusiastic advocate of drafting Gore to run in '08. I like him for many of the reasons you listed as being impressed by him. I think he would be a formidable candidate. We need his voice of moral clarity.

My question is: would he be willng to lay it on the line, campaign on his moral vision and risk losing? If not, and if he runs another cautious campaign, tempering his authentic voice, he'll lose again.

I completely agree that Gore would fail if he didn't campaign on his moral vision. And I just don't know whether he has it in him. I don't think he is phony, though he is undoubtedly complicated enough so there is more than the rousing orator of the other day. That "more" tends to get in the way of candidacies.