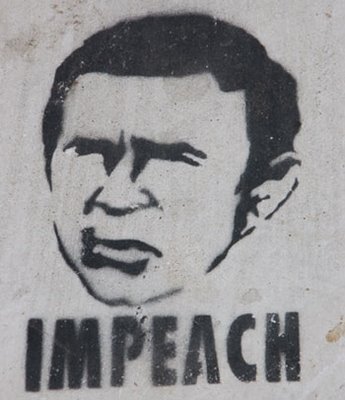 The President's portrait can be observed stenciled on the sidewalks of San Francisco.

It was a great pleasure this morning to read the San Francisco Chronicle waxing somewhat apoplectic about our local ballot measure calling on Congress to impeach the President.

Prop J. This measure's call for an impeachment trial for President Bush and Vice President Dick Cheney -- for their violations of the law -- is mocked by its assumption of guilt at the outset. ...Vote NO.

I have supreme confidence in the voters of San Francisco -- we'll vote YES.

The Chronicle, and elites generally, need to understand that our lack of concern for process is what happens when political and legal systems become so perverted that they no longer sustain even a pretence of justice. A President and Vice President whose lies led to the deaths of nearly 3000 U.S. service personnel, not to mention perhaps some 600,000 Iraqis (so far) don't get the benefit of a lot of peoples' doubts.

On some level, we're shortsighted to express our frustration outside the limits of a measured process. So is the right is when it seeks to cashier judges who have the temerity to rule in accord with law but against their druthers, whether for a woman's right to choose or against Presidential usurpation of monarchical powers of wiretapping and surveillance. But when people believe the wheels of justice have become gummed up, unless completely beaten down, they'll start banging on the machine and pushing with all their might to get justice moving again. For elites, that's always a fearsome moment.

It is even more important that San Franciscans vote for Prop. J since our local Congresswoman and the likely Democratic Speaker-to-be, Nancy Pelosi, has pledged that impeachment is "off the table." This may (or may not) be smart politics, but we need to let her know loud and clear that her constituents don't think the law-breaking twosome deserve a get-out-of-jail free card. Nor does she deserve a pass from being called out and pushed on if she denies us access to the measured, legal remedy for criminal conduct by our elected officials.

Citizens calling for impeachment may be agitating outside conventional decorum, but we have to keep in mind, as Kagro X points out, that nothing in the past history of the Bush-Cheney regime suggests that they'll meekly comply with legal Congressional efforts to investigate their wrongdoing.

We get the amount of democratic process we force out of our elites, not the amount they give us.
Posted by janinsanfran at 2:03 PM

The day the nation demands impeachment is almost upon us. On Jan 3rd, sacks and sacks of mail will be sent to congress demanding impeachment via the House of Representative's own rules. This legal document is as binding as if a State or if the House itself passed the impeachment resolution (H.R. 635).

There's a little known and rarely used clause of the "Jefferson Manual" in the rules for the House of Representatives which sets forth the various ways in which a president can be impeached. Only the House Judiciary Committee puts together the Articles of Impeachment, but before that happens, someone has to initiate the process.

That's where we come in. In addition to the State-by-State method, one of the ways to get impeachment going is for individual citizens like you and me to submit a memorial. ImpeachforPeace.org, part of the movement to impeach the president, has created a new memorial based on one which was successful in impeaching a federal official in the past. You can find it on their website as a PDF.

STOP WAITING FOR YOUR MEMBERS OF CONGRESS TO ACT FOR YOU.

You can initiate the impeachment process yourself by downloading the memorial, filling in the relevant information in the blanks (your name, state, etc.), and sending it in. Be a part of history.

I urge you and your readers to take a few minutes and examine:

It's a list of the 25 most recent comments made by real Americans participating in an online poll/letter-writing campaign concerning the impeachment charges recently filed against Vice President Cheney, which are now being evaluated by the House Judiciary Committee. Comments can be sent to elected representatives and local newspapers at your option. The participation page is at:

Since this campaign began, three members of Congress have signed on as co-sponsors, in part due to hearing from their constituents. Make your voice heard!