Perhaps we are winning? 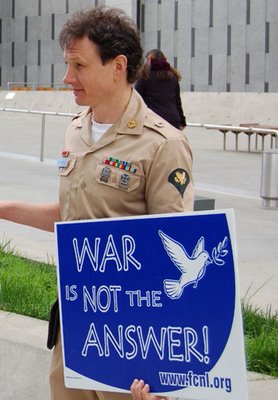 Could the antiwar movement be winning and not know it? Steve Gilliard thinks so.

People have mistaken the opposition to the Iraq war. The anti-war movement has blocked the enlistment of thousands of kids, quietly, effectively, helped thousands of UA members escape or stay underground, has mobilized veterans against the war. While this isn't the generation defining movement of the 1960's, it's also vastly more effective.

But because it's one on one, there is no massive repression or sterotyping of the movement. Cindy Sheehan is hardly Abbie Hoffman. The attacks by the right have largely been ineffective.

And unlike the Vietnam War, 50 veterans are running for office as Democrats, something unimaginable two years ago. If just 10 of them win House seats the ability of Bush to make shit up ends.

Also, the general embrace of servicemembers [has] given their complaints about Iraq vastly more credibility. They are not angry and alienated, they are angry and working for change within the system. Which is why the GOP has to Swift Boat, because of the power of their stories.

For those of us who want an antiwar movement that repudiates U.S. imperial ambitions, this clearly isn't good enough. But just maybe, we are seeing an antiwar movement that is rooted in the actual experience of the ordinary people of this country, that broad middle and working class who must ultimately endorse any shift away from bellicose militarism. It is an idea worth thinking about, instead of berating ourselves for our weakness.

Meanwhile I'll keep shipping out antiwar newspapers. I just got an order for 1200 papers for a local vigil. Though you may not see it on TV, the antiwar movement is very widespread and deep in our communities. 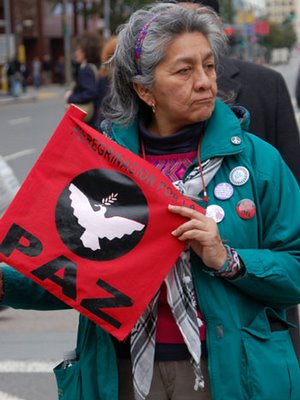 Posted by janinsanfran at 5:43 PM

Don't think I've ever said, tho I think it everytime you mention the anti-war paper you're distributing, what a GREAT act that is! there are hordes ofpeople to be reached off-line. thank you.

Jan - I think there is some truth to this guy's analysis. Their is a broad swath of folks who are not oppossed to war in principle who are coming to oppose this war. May their numbers flourish.

I was heartened that Bishop Marc Andrus, the Episcopal Bishop of the Diocese of California, came out yesterday strongly opposed to the War and committed himself to public protest and advocacy against it.