A city of ghosts 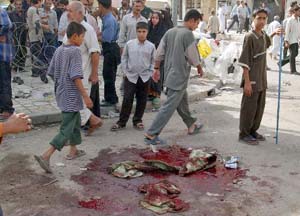 Last spring, I wrote about Anthony Shadid's account in Night Draws Near of the nightmare the U.S. has unleashed in Iraq. Shadid has returned to look up his friends in Baghdad. Here's how he begins his column today from the Washington Post.

It had been almost a year since I was in the Iraqi capital, where I worked as a reporter in the days of Saddam Hussein, the U.S.-led invasion in 2003, and the occupation, guerrilla war and religious resurgence that followed. On my return, it was difficult to grasp how atomized and violent the 1,250-year-old city has become. Even on the worst days, I had always found Baghdad's most redeeming quality to be its resilience, a tenacious refusal among people I met over three years to surrender to the chaos unleashed when the Americans arrived. That resilience is gone, overwhelmed by civil war, anarchy or whatever term could possibly fit. Baghdad now is convulsed by hatred, paralyzed by suspicion; fear has forced many to leave. Carnage its rhythm and despair its mantra, the capital, it seems, no longer embraces life.

"A city of ghosts," a friend told me, her tone almost funereal.

Read it all.
Posted by janinsanfran at 7:08 AM