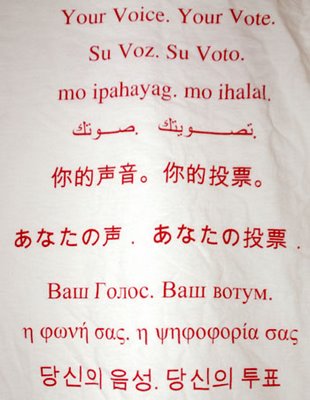 No, it won't. In general, newly minted citizens, especially Latinos and folks of various Asian origins, are well on the way to joining African Americans as the backbone of the Democratic Party. Only a myopic vision that mistakes a momentary snapshot of reaction for an enduring trend could claim otherwise.

Along with taxes and security, immigration represents one of the pillars of Republican attacks on Democrats this year. Regardless of the district or state, an inflammatory attack on Democrats for allegedly supporting amnesty and Social Security benefits for illegal immigrants fills the airways and mailboxes.

But the data are not so clear that attacking Democrats on immigration is terribly effective, at least in many races. While many Americans hold hostile views towards immigrants and are deeply disturbed by the notion that illegal immigratrants receive government benefits (which is not entirely true), the debate as it has played out has not necessarily benefited Republicans.

In reality, Democrats have not been particularly progressive on immigration issues. But they do okay by contrast with the other guys.

Anti-immigrant sentiment usually serves as a cover for racial anxiety -- a fear that white America is being swamped by a Brown Other. Many Democrats buy into this worldview, though not as consistently as most Republicans. The latter party made itself the undisputed champion of white supremacy by adopting the Southern strategy beginning with Reagan. With their huge base of African American voters, Democrats can only sporadically and weakly compete in the white supremacist sweepstakes.

Oh sure, there are pockets of new citizen voters who have brought with them repressive cultural opinions that accord with Republicans.

But most new immigrants of all sorts want government to level the playing field so they can work their way to a better life in their new "land of opportunity." If white Democrats don't completely capitulate to the racist strains always lurking in U.S. society, their future belongs to an emerging majority that cares more about fairness and smart governance than holding on to a mythical past.
Posted by janinsanfran at 2:09 PM