New fundraising strategies:
Play with guns ...
or even at being an assassin 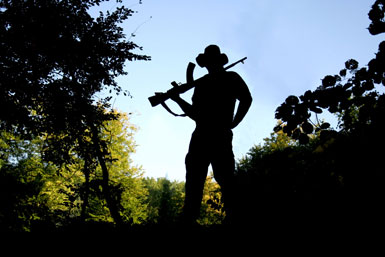 "There's not many places you can go to shoot these kinds of guns in a safe and secure environment and do it for a good cause," said Julie Hill, a participant as well as the manager of acquisition marketing for St. Jude.

Bill Arnold, the chairman of the Memphis Friends of the NRA chapter, said a safe and supervised opportunity to handle the guns can help people get over any fear and maybe get them interested in the sport, he said.

Not my cup of tea. I know there are real hunters out there, for whom shooting is skill and sport. But when I last lived somewhere rural, I also saw too damn many drunken crazies driving around hoping to catch a deer in their headlights and mow it down. Those guys (all guys as far as I know) scared me and everyone else shitless.

JERUSALEM (Reuters) - It's billed as the "Ultimate Mission" -- an eight-day, James Bond-style quest behind the scenes of Israel's conflict with Palestinian militants.

For a little less than $2,000 and a donation to a center that sues countries and groups it accuses of militant links, participants are promised briefings from Israeli spies, a visit to a West Bank checkpoint, tours of the Lebanese frontlines and trips in light aircraft over northern Israel.

In exchange for your donation, an outfit that bills itself as the Israel Law Center will take you on a tour of the Israeli Air Force unit that carries out "targeted killings" and provide a "live exhabition [sic] of penetration raids in Arab territory."

Yes, this blood thirsty bunch claim to be a Law Center. And the Queen of Hearts was a jurist: "Off with their heads."

Hat tip to Non-Profit Quarterly for the Memphis story and to KABOBfest for Israeli mad tea party.
Posted by janinsanfran at 5:46 PM