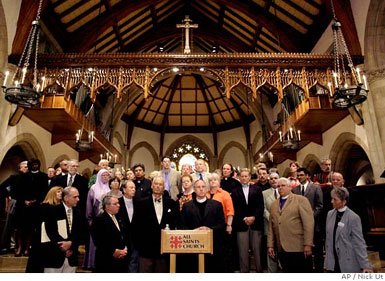 The Rev. Edwin Bacon Jr. (at podium), rector of All Saints Church in Pasadena, with Bob Long, senior warden, at his right, discusses the church's fight against an IRS investigation into an anti-war sermon. Associated Press photo by Nick Ut

All Saints Pasadena Episcopal Church is in trouble with the Internal Revenue Service. A former rector preached a pre-election sermon in 2004 denouncing the Iraq war and by implication the sitting president:

"The sin at the heart of this war against Iraq is your belief that an American life is of more value than an Iraqi life," [the Rev. George Regas] said.

An unexceptional thought to this Christian, but apparently enough to get the tax authorities looking at whether the parish should keep its tax exemption.

From where I sit, I see the religious right constantly taking advantage of its tax-exempt status; many conservative churches push candidates who would privilege Christianity over other faiths and over secular belief systems. Not surprisingly, these folks, including Richard Land of the Southern Baptist Conference and the rigidly conservative Congressman Walter Jones (R-NC) see All Saints' legal predicament as a chance to advance their view that churches should be allowed to endorse candidates. They want a new law exempting churches from the rule that non-profits can't engage in partisan politics.

This is not the position of the Pasadena church. All Saints is in the difficult bind of advocating for both its right to preach the implications of a Gospel of justice and for its belief in a separation of church and state which forbids partisan activity by churches. It holds that such a separation is healthy for society and even for faithful belief. Consequently churches should not be making partisan prescriptions. In a sound bite world, warped by decades of rightwing appropriation of the language of justice, this is a tough position to explain.

All Saints certainly has a case under the current law: do we really want the IRS trying to discern whether religious speech that invokes God and values and does not explicitly endorse a candidate has crossed some invisible line into partisanship? Do we want the IRS acting as thought police? As an affluent parish with excellent lawyers, I would expect them to win after a protracted struggle.

But I would also expect the case to have a chilling effect on other progressive faith-based institutions that are less well-funded and possibly less confident in their convictions.
***
There is another way in which some religious people have approached the issue of maintaining the integrity of their witness without becoming compromised by legal restrictions. The Catholic Worker movement long chose to forgo both the benefits (tax exemption for themselves and their donors) and the obligations (licensing, speech restrictions) that come with non-profit status. Despite their resulting precarious status, "houses of hospitality" around the country have fed and housed the needy and stood up for progressive values in the public arena for over 70 years.

Occasionally the government has tried to get Catholic Workers to play by its rules. About one such instance in May 1972, Dorothy Day wrote in the movement's New York newspaper:

The Catholic Worker has received a letter from the Internal Revenue Service stating that we owe them $296,359 in fines, penalties, and unpaid income tax for the last six years. As the matter stands right now, there might be a legal battle with delays and postponements which may remind us of Dickens' Bleak House. Or, since we will not set up a defense committee to campaign for funds, it may terminate swiftly in the confiscation of our property and our bank account (never very large).

... [Christ] came to serve, to show the new Way, the way of the powerless. In the face of Empire, the Way of Love.

And here in small groups we are trying to talk of these things in the midst of the most powerful country in the world, during wartime, with the imminent threat of being crushed by this government, all because of principle, a principle so small and so important! It is not only that we must follow our conscience in opposing the government in war. We believe also that the government has no right to legislate as to who can or who are to perform the Works of Mercy. Only accredited agencies have the status of tax-exempt institutions....

As... an unincorporated group, we will not apply for this "privilege." ... Frankly, we do not know if it is because the government considers us a danger and threat that we are faced by this crisis. ...Our refusal to apply for exemption status in our practice of the Works of Mercy is part of our protest against war and the present social "order" which brings on wars today.

This particular demand by the IRS came to nothing. Under a barrage of criticism from politicians, priests and the New York Times, on this occasion the Feds thought better of seizing the assets of an institution that enjoyed almost saintly status in the public imagination.

Could religious institutions operate outside the non-profit legal model today as the Catholic Worker did 35 years ago (and still does in many places)? In practical terms it would be much harder now -- the government, claiming to fight drug trafficking and terror, makes getting a bank account nearly impossible without a legal status. There is now probably no way to own a building or other real property without a legal status. Donors are more accustomed (better trained?) to want tax breaks along with their contributions. Living outside the law not only means "you must be honest" (Bob Dylan) but also means being poor.

I wouldn't ever tell All Saints Pasadena it had to be poor. I don't want to be poor myself. Poverty means unending struggle to survive and chronic insecurity. Nobody wants that. And I suspect that All Saints will come through this round with its integrity intact, and even strengthened.

But I am glad that the example of the Catholic Worker (and other uncompromisingly faithful witnesses) exists to make all of us think hard about how we go about living out our convictions. In a time when our government has legalized torture and seems bent on preventing U.S. Muslims from practicing charity, we have to think enough outside the box to realize that the 501(c)(3) status of churches is not a facet of some law of nature. Non-profit status, with its rules and benefits, is a product of the U.S. tradition of the state.

If our state is more and more warped to vicious ends, this gift may become more than faithful people can afford to accept. What that means in practice I don't know, but some institutions and some individuals may be called to find out.
Posted by janinsanfran at 6:50 PM

I think of nonprofits as simply a tax designation. They are no better nor worse than their capitalist brethren, and in fact most of the nonprofits have been completely co-opted by the latter. (And don't even get me started on the evil AIDS nonprofits.) So it's immensely reassuring to hear the Dorothy Day story.

We knew this was coming... and it's kind of funny. All Saints Episcopal Church has been resisting efforts by the IRS to investigate an anti-war speech given by it's minister just before the 2004 election. Now conservative churches who want to exercise their free speech in the pulpit are coming to All Saints defense... even if it's unwanted support. From the San Francisco Chronicle:

****
Bob Edgar, a retired Democratic representative from Pennsylvania who is general secretary of the National Council of Churches, said the investigation of All Saints feels to him like an attempt to scare churches away from expressing moral views on political issues, and he argued that many conservative churches are far more blatant in their efforts to sway voters.

But he was adamant that the members of his organization would fight any erosion of the law banning direct political endorsements by churches.

"We believe in the separation of church and state, and this should not be used to let these groups break that down," Edgar said.
****

Bob Edgar believes in the separation of church and state as long as that separation serves his own political purposes... and this is the most idiotic part of the debate: Where is the line that separates the two?

There's no real principle involved here, the line moves depending on your politics. Edgar and clan think it's OK to advocate clearly partisan positions from the pulpit as long as you don't explicitly support a candidate. Conservative churches want unlimited freedom in the pulpit and still retain their tax exempt status.

Both sides should put their money where their mouths are: If they want to play politics then they should forfeit their tax-exempt status. It's really that simple.