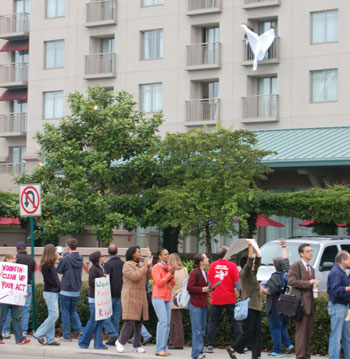 Suppose we win an election fight? Then what? A current local kerfuffle that could end up with immigrant workers intimidated and/or deported gives a sense of what we are up against when "we" refers to the contemporary U.S. working class and friends.

In the California election of November 2005, the city of Emeryville passed Measure C by a 54 percent margin. Emeryville is small slice of urban land sandwiched between Berkeley and Oakland that has sought prosperity by opening itself to chain retailing, a kind of exurban oddity in a strip of urban grit. It has three non-union, chain hotels -- the Four Points by Sheraton, Woodfin Suites and Courtyard by Marriott -- that have undercut unionized hotels in the area by paying their workers less. The unions and their community supporters wrote Measure C to guarantee hotel workers a living wage ($9 an hour!), job security when hotels are sold, and reasonable workload limits. The election was hard fought, but though Emeryvillians may have a different development strategy from most of the inner Bay Area, they have the same values, so Measure C triumphed. 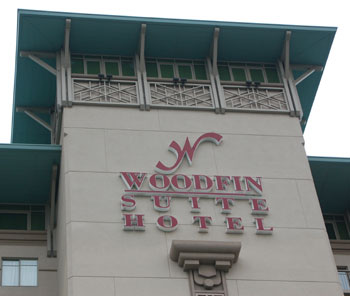 The hotels have the same values they have in the rest of the country, so when Measure C became law, they ignored it, sought to evade it, and threatened workers who brought the law up. According to an email from staff at the East Bay Alliance for a Sustainable Economy (EBASE) one hotel's non-compliance stood out:

[T]he Woodfin Hotel has repeatedly punished and threatened workers for discussing Measure C. Managers have given workers false information, held captive-audience meetings, grilled workers individually about their opinion of the law, and fired a worker involved in Measure C outreach. In spite of this harassment, dozens of Woodfin workers have organized to stand up for their Measure C rights – educating other workers, presenting a petition to managers to demand compliance, and speaking out before the Emeryville City Council.

Last Wednesday, the hotel escalated its attempt to scare its workers, demanding that they resubmit their work authorization documents within 24 hours or be terminated. If you haven't gotten a job lately and especially if you are a citizen, you probably have forgotten what that means: employers are required by federal law to see proof of legal status before hiring anyone. How careful employers are about this depends on who they are, how badly they want the job filled, and a host of other variables. Suffice to say, usually not very careful. And the federal law only requires them to look at some kind of paper once -- nothing about repeatedly checking workers' status. EBASE insists:

This is an obvious and illegal attempt to use immigration status to punish workers for speaking out.

On Thursday, workers and friends gave management a petition asking them to explain why they were making these threatening demands. After all, if you are an immigrant low-wage worker in a strange land, these official hoops are the stuff of nightmares. 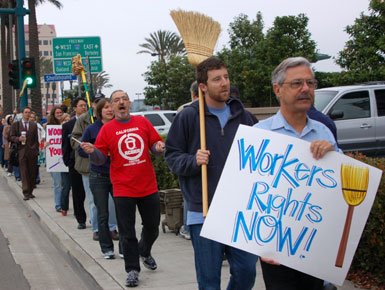 On Friday morning, EBASE mobilized about 40 community supporters and members of organized labor to tell Woodfin Suites to clean up its act. Folks carried brooms and mops to emphasize the message. 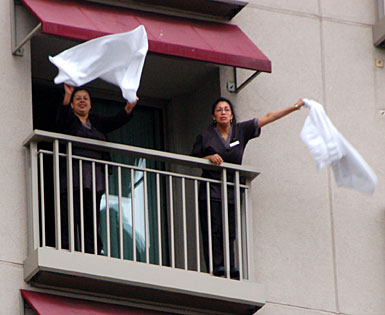 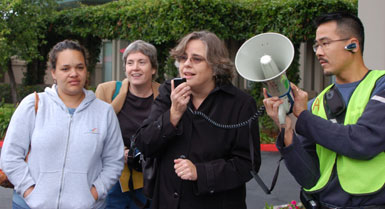 Left to right: Danielle Mahones of the Center for Third World Organizing, Margaret Gradie (Political Director) and Sharon Cornu (Executive Secretary-Treasurer) from the Central Labor Council of Alameda County report back on trying to speak with management. Wendell Chinn holds the bullhorn.
Hotel bosses didn't want to talk with the picketers' delegation. Woodfin manager Mary Beth Smith denied they were retaliating against the workers for asserting their right to a living wage under Measure C. Picketers promised to come back to support the workers -- and to call Ms. Smith at (510) 601-5880 to express our opinions of the hotel's management practices.

So -- suppose we win an election fight? Then what?

Then we have to turn to whatever tactics are necessary to defend our victory. Usually that means lawyers and regulatory outfits, but defense of gains also nearly always requires the tactics of ongoing public mobilization: petitions, protests, and possibly theatrical actions.

Supposing Democrats win the House or Senate in November, that victory is not going to be a signal to relax. The Democrats we get are the Democrats we, the people, kick into shape.
Posted by janinsanfran at 8:24 AM

Jan! We are so grateful for your support! There will be another action this coming Thursday morning from 7-9 AM at the Woodfin Suites Hotel. Bring mops, buckets, and brooms.