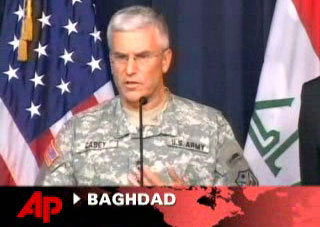 Today, in preparation for a talk about the trip I took to Jordan and Syria last summer, I performed a depressing experiment. I read through the main articles loosely covering the Iraq war offered in some of our most authoritative newspapers collecting interesting tidbits. I won't repeat the headline drumbeat from U.S. authorities, military and civilian, trying to sping the emerging disaster as something more positive, especially until November 7. But here are some telling oddments, often from lower ends of long recitations of the official story.

In Falluja on Monday, American troops, responding to a report that a fire truck had been hijacked by insurgents, stopped a fire truck matching the description, the command reported. As the truck’s four occupants “exited quickly,” the statement said, the troops opened fire, killing them. American troops later found that the men were actually firefighters responding to an emergency call and were not riding in the hijacked truck.

Who's in charge here?

[Iraqi Prime Minister] Al-Maliki, who is commander in chief of Iraq's army, heatedly denied he knew anything about the raid.

A copy of the timeline Mr. Khalilzad said had been agreed to by Iraqi leaders was made available to The New York Times by American officials. Entitled “notional political timetable,” it sets a seven-month schedule, running from this September to March 2007....

Casey and Khalilzad, the top U.S. military and civilian leaders in Iraq, were left for several minutes to deliver their remarks in darkness illuminated only by the battery-powered lights of TV camera crews. One of Baghdad's frequent power outages cut electricity to the converted parking garage that houses the U.S. military press center, briefly knocking the internationally broadcast conference off the air.

Since Iraq lacks an effective banking system for paying its troops, soldiers are generally given a week’s leave each month to bring their pay home.

Where have all the jihadis gone?

"In Afghanistan, you have NATO troops to fight as well as Americans, all the 'crusaders.' "

None of this touches on the critical human story, a tale of unremitting carnage and displacement of Iraqis as that society collapses. These were the stories we heard from Iraqis in Jordan and Syria.

This week the United Nation's relief agency (UNHCR) confirmed that 3 million Iraqis have been driven from their homes by the war. This is ten percent of the population, many without homes or work. About half are within the country and half in neighboring states, Jordan, Syria, and Lebanon, which are not economically or politically able to assimilate such a movement of people. Yet the funds available to the UNHCR to help Iraqi refugees have been cut from $150 million in 2003 to just $29 million in 2006. More than all the U.S. newspaper accounts, this Iraqi man's cry for help speaks the truth of what the U.S. has wrought:

"We do not have jobs because there are thousands of Iraqis in Syria and without this help we are going to have to beg for money in the streets," said Haj Jamal, a 62-year-old Iraqi refugee living in Damascus.

"I urge in the name of all Iraqi refugees in Syria that the United Nations looks after this situation and remembers that without this support, thousands of newly poor people will be walking the streets of Syria next year," he added.

The head of the UNHCR office in Damascus reports that he has a budget of one dollar to spend on each Iraqi refugee in the country.

I think the peace movement needs to move into demanding reparations.
Posted by janinsanfran at 3:15 PM