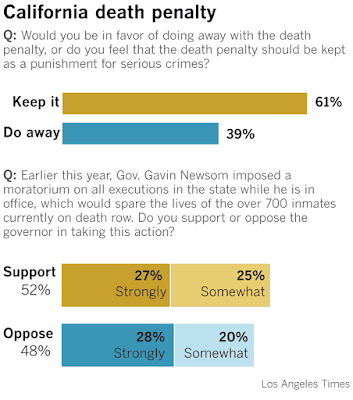 According to an L.A. Times poll, we still like the death penalty. But a majority also supports Governor Newsom's decision to grant a blanket reprieve to all 737 convicted inmates sitting on death row, apparently interminably.

I look at the split consciousness in this poll and I see Californians absorbing what anti-death penalty campaigners have been trying to explain for a decade: death sentences have become a cruel hoax. Who is charged and tried under a possibility of execution is a question of which county the crime took place in. Most prosecutors have decided that death cases are too expensive and too hard to win, so they opt for charges that will send the bad guy away for the rest of his life. Which charges prosecutors bring are often discretionary; communities of color that have learned that they can't trust the authorities. These communities assume actual or structural bias in charging decisions (they believe the DA comes down on black men at every chance!) and they may be right. Meanwhile, thanks to the good work of death penalty lawyers, California doesn't actually execute condemned prisoners; it just warehoused an ever larger number in the most expensive possible confinement until Newsom broke the logjam.

The state's major media and political class (the subset of citizens who attend to policy and politics) absorbed this lesson a decade ago, but a majority remain hesitant to give up the possibility of "an eye for an eye." Support for the death penalty expresses a gut need for social condemnation of terrible acts. Could a less-than-lethal sentence satisfy our need to feel justice has been done?

Campaigners against the death penalty have been offering sentences of "life without possibility of parole" as the substitute. But an untrusting fraction of us just doesn't believe the system will keep its promises. According to the pollster:

“People in some ways think that that’s the preferable way to go,” [Mark] DiCamillo said of life in prison without the possibility of parole. “But there’s a segment of the public that believes there will be some way, somehow down they road they will be able to get out.”

Too many citizens feel too little reason to trust the government.

At least for the duration of Gov. Gavin's term, California won't have executions, though a few county DAs are still charging heinous crimes as offenses that might allow the death penalty. It ain't over ...

...
Concurrently, the gaggle of Democrats who want to be president are largely coming out in opposition to the death penalty. Presidents don't have much actual sway over executions; only 62 prisoners are under federal order of death. There hasn't been a federal execution since 2003. It's state governments that kill, more and more rarely.

Apparently the presidential contenders consider their stance at least politically neutral, if not a net benefit to their campaigns.

If candidates “thought they were going to hurt themselves by coming out against the death penalty, I really think very few would do it,” said Jessica Levinson, a professor at Loyola Law School in Los Angeles who specializes in election law and governance. “I think the consensus (among candidates) is, this is where public opinion is or is about to be.”

Former Vice President Joe Biden is an outlier among the Democratic field in clinging to his long approval of a federal death penalty.

Posted by janinsanfran at 8:20 AM