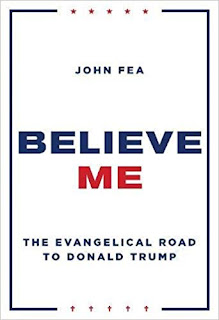 This book is about "existential" terror experienced by white evangelicals -- fear of the unknown Other, of Black and Brown people, of LGBT people, of people who believe differently or don't believe at all, of uppity women (even white ones). These are some scared folks. And that isn't all.

Professor John Fea is an historian, teaching at Messiah College, a private Christian institution in Pennsylvania. After the November 2016 election of Donald Trump, whom he viewed as embodying the antithesis of the values he teaches, he experienced an uncomfortable incongruity.

Five days later -- the Lord's Day -- I took my seat in the sanctuary of the central Pennsylvania megachurch where I have worshipped for the last sixteen years. As I looked around at fellow worshippers, I could not help thinking that there was a strong possibility, if the reports and polls were correct, that eight out of ten people in that sanctuary -- my brothers and sisters in my community of faith -- had voted for the new president-elect.

Believe Me: The Evangelical Road to Donald Trump is his exploration of how a philandering, lying, racist could have become the white hope of his brother and sister evangelical Christians. It's a depressing catalogue.

His starting point is the story of how white evangelicals came to feel unmoored from their country during the Obama presidency. Since the 1960s, immigration by people of color from what seemed novel faith traditions coincided in time if not in location with an LGBT insurgency against gender certainties. (Aside from allusions to pro-choice women, Fea doesn't grasp the nasty nettle consisting of U.S. women's broad rejection of confining patriarchal roles for our lives -- an insurrection against traditions that was broader and deeper than anything we queers did to society.) Obama himself triggered a particular, longstanding fear.

Many evangelical voters also believed that Obama was a Muslim, and American evangelicals have always feared Muslims. Jonathan Edwards, the patron saint of many modern-day evangelicals, believed Islam was one of "two great kingdoms which the devil ... erected in opposition to the kingdom of Christ (Catholicism was the other one)".

He argues that white evangelicals went looking for a mean Daddy to protect them:

In a September 2016 lecture at Messiah College, conservative New York Times columnist Ross Douthat told a packed audience that in a post-Christian age, evangelicals might find themselves relying more heavily on political strongmen to shield them from rushing secularization. ... Douthat suggested that evangelicals seem to need Trump, a man with no real Christian conviction to speak of, to protect them in the same way that Syrians need the brutal dictator Bashar al-Assad to protect them agains the threat of ISIL.

Fea's narrative history of evangelical fear of the unknown and uncaged, which reaches back to my Puritan ancestors, is the most interesting section of the book. He offers a sad enumeration of historical dead ends: witch trials in early Massachusetts, a politics of fighting the "Catholic Menace" via the Know-Nothing movement before the Civil War, adoption of the ideology of white superiority for fear of revolts by enslaved Africans, and on to their own revolt against modern scholarship and science that led to their champion William Jennings Bryan's humiliation in the 1925 Scopes Monkey trial. The resurgent Ku Klux Klan in the North in the 20th century was also very much an appendage of white evangelical/fundamentalist culture.

Fea goes on to outline how the men he calls the "court evangelicals" -- Jerry Falwell, Franklin Graham, James Dobson, Mike Huckabee, Robert Jeffress, etc. --- have weaponized evangelical fear in service of their own power and the Republican Party. All of this leaves Fea very sad. He concludes regretfully:

... it is possible to write an entire history of American evangelicalism as the story of Christians who have failed to overcome fear. Evangelicals have worried about the decline of Christian civilization from the moment they arrived on American shores in the seventeenth century. They have celebrated American values such as "freedom" and "liberty" while simultaneously building exclusive communities that do not tolerate dissent. ... White evangelical fear of newcomers -- those who might challenge the power and privilege that evangelicals have enjoyed in a nation of Protestants -- has been present in every era of American history.

There is a lot of soul-searching here, but I found something missing. Trump-applauding evangelicals are not only scared witless, they seem also willfully ignorant of the very considerable riches of modern knowledge, of history, and of science. I have a hard time believing that Jesus called his followers to be stupid. So does Fea.

The Bible teaches that Christians are to fear God -- and only God. ... The belief that the United States is a Christian nation is a form of idolatry.

He concludes he can only hold onto hope and continue to try to offer "history, not nostalgia."
...
Lest I be ignoring the "beam in my own eye" I should point out that this sort of blinding fear is still with us even in my own Church which the world considers the epitome of liberal Christendom. Thanks to the brave, tireless witness of several generations of LGBT folks and friends, the overwhelming stance of most Episcopalians is inclusive of all and at least verbally against manifold injustice's to God's people. But a dissenting bishop just offered this message to his diocese which seems a downright Fox News-inspired expression of Christian fear:

When you have a masked jihadist holding a knife to your throat demanding that you denounce your belief in Jesus Christ, you know your faith is under attack.  When the forces of culture and society encourage you to embrace a particular agenda all in the name of social justice or women’s rights, or political correctness we can sometimes compromise our faith and violate God’s Holy Word before we realize what has happened.  ... I am convinced that the day will come in our lifetime, when a person who stands up and speaks about sexual morality (particularly in regard to homosexuality or transgenderism) and quotes Leviticus or Romans – will be charged with a “hate crime” and either fined or imprisoned for doing so.  The current “Equality Act” just passed by the House and now before the U.S. Senate may very well create that scenario.  Are you prepared to go to jail for the Gospel’s sake?  What is happening in other parts of the world is at our doorstep.

Evangelicals aren't the only Christians trapped in their terrors.
Posted by janinsanfran at 7:00 AM

A rather foreboding post. I have felt for awhile now the dangerous times heading our way due to religious extremism..
Evangelicalism is the ISIS of our nation. It will not end well. Lack of good education has a lot to do with it but also the backward mindset that for some reason, seems to plague our country more than other Western Civilizations.