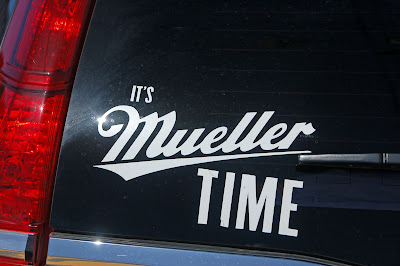 As an expression of regard for all the lawyers and other serious students of authoritarianism whose observations and dogged work have helped keep me sane since the election of Donald Trump, I'm reading the Mueller Report. Lawyers, pundits, and Robert Mueller himself seem to beg citizens to "just read it." So I am reading it. It will be slow going, not because it is hard to read, but because it is simply depressing. Look for occasional progress reports here.

Initially, here's what I gleaned from the first two sections; these describe activities for which Mueller entered indictments with bills of particulars during 2018, so much of their content has been thoroughly chewed over in the media.

"Russian Active Measures Social Media Campaign"
The Mueller investigation determined that a Russian public/private entity -- that is, it was fronted by one of Putin's oligarch buddies -- the Internet Research Agency:

Rubbing salt in our national wounds and our enduring shame,

the IRA created accounts in the names of fictitious U.S. organizations and grassroots groups and used these accounts to pose as anti-immigration groups, Tea Party activists, Black Lives Matter protestors, and other U.S. social and political activists.

Mueller confirms what Timothy Snyder hypothesized from looking around in The Road to Unfreedom; the fuel here was our own injustices and divisions.

Among the fake personas/accounts that Russian operatives created was something that called itself "Blacktivist." I vaguely remember material from Blacktivist floating through my Facebook feed; I also remember sensing that something was a little off there. But, I thought, lots of odd opinions float about.

Since I write in an opinionated way about contentious matters of race, gender and power, I would not be surprised if automated internet trawling looking for easy targets had picked me up. And I have some confirmation that is true. I seldom pay any attention to this blog's stats which, though rudimentary, give me a very rough sense of where traffic originates. I remember being surprised by the number of hits from Russia in the 2015-2017 period. I can't isolate and retrieve the numbers from that time (I really don't pay much attention); but I can report that over the blog's life nearly 14 percent of its traffic was identified by Google as originating in Russian. I have occasionally written about Russia long before Trump but nothing to really call attention .... WTF???

The Russians used the social media program to keep us inflamed. And they found a ready audience -- most especially among the Trump campaign and its hangers-on.

Among the U.S. “leaders of public opinion” targeted by the IRA were various members and surrogates of the Trump Campaign. In total, Trump Campaign affiliates promoted dozens of tweets, posts, and other political content created by the IRA.

Mueller treats the U.S. persons who disseminated Russian material as unwitting dupes; some ordinary citizens even organized pro-Trump rallies. Though it is painful to think of this "active measures campaign" as a successful foreign intrusion on our election, in truth the Mueller description reads exactly like what any well-resourced, ethically under-scrupulous, U.S. political campaign would likely attempt to organize, hopefully a little more transparently. There is no suggestion that the actual Trump for President campaign had the capacity to do anything this competent.

And by 2020, every campaign (and who knows how many countries) will probably have some more or less covert branch/offshoot trying to replicate this. Campaigns glom on to what worked in the last cycle ...

"Russian Government Links To And Contacts With The Trump Campaign"
The Mueller report summarizes this section:

Beginning in March 2016, units of the Russian Federation’s Main Intelligence Directorate of the General Staff (GRU) hacked the computers and email accounts of organizations, employees, and volunteers supporting the Clinton Campaign, including the email account of campaign chairman John Podesta. Starting in April 2016, the GRU hacked into the computer networks of the Democratic Congressional Campaign Committee (DCCC) and the Democratic National Committee (DNC). The GRU targeted hundreds of email accounts used by Clinton Campaign employees, advisors, and volunteers. In total, the GRU stole hundreds of thousands of documents from the compromised email accounts and networks.109 The GRU later released stolen Clinton Campaign and DNC documents through online personas, “DCLeaks” and “Guccifer 2.0,” and later through the organization WikiLeaks. The release of the documents was designed and timed to interfere with the 2016 U.S. presidential election and undermine the Clinton Campaign.

Some observations: In general, though the hacking and email releases through cut outs were Russian military operations, for me the Mueller report confirms what those who know Russia better than we do, such as Masha Gessen, have been trying to tell us: “[Putin's] not actually so scary.”

These sections of the Mueller Report left me believing that the Russian social media manipulation and the cyber attack got very, very, very lucky through exploitation of a cluster of clowns -- of whom the most cretinous became President -- whether or not Trump is actively guilty of anything. To be continued as I read further ...
Posted by janinsanfran at 8:25 AM


As to Julian Assange:

There are some who disagree with your conclusions as to the charges leveled against Julian assange. https://www.craigmurray.org.uk/archives/2019/06/a-swedish-court-injects-some-sense/

Whose the dupe?
Keep on trucking. As best as we can.

I had a similar bizarre bump in readership from Russia at "Civic Center" and wondered what the hell was going on.