Remembering the dead 30 years after Tiananmen 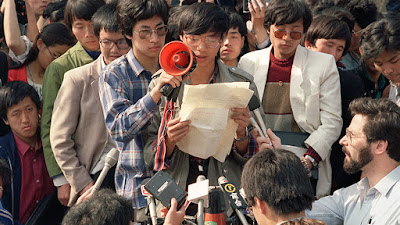 From the delightful volume China A to Z: Everything You Need to Know to Understand Chinese Customs and Culture, I have learned that the most important activity of Tomb Sweeping Day (Qing Ming) that Chinese celebrate on April 5 is "to care for the graves of one's ancestors. Traditionally this meant sweeping the dirt away and weeding the cemetery plot." Interestingly, that's almost exactly the sort of activity my very WASP mother engaged in around Decoration Day (now Memorial Day) when she visited her family's plot, sometimes planted flowers or clipped grass, and complained to cemetery authorities if any head stones were leaning tipsily.

In The Souls of China: The Return of Religion After Mao, journalist and China scholar Ian Johnson provides a vignette describing of the personal Qing Ming ritual performed by Xu Jue, the mother of a young worker killed in the Tiananmen massacre. She not only lost her son when the ruling Communist Party crushed the peaceful democracy protest in 1989; soon after her husband, who had raised the boy, contracted leukemia and "died of anger."

The Party has done everything it can to erase memories of the terrible slaughter in Beijing, but Johnson finds that this is not so easy when there are survivors who know what happened in their country. Xu Jue showed Johnson how she remembers.

As she spoke, she began unpacking a box, assembling what was left of her son. She laid on the sofa a stained blue work shirt that he wore that night. ... She placed a black and white photograph of her son where his head would have been. He is young, with Xu Jue's small mouth and intense eyes. His name, Wu Xiangdong, had been taped over the bottom of the photograph.

Then she laid out two thin white strips of cotton. They framed the shirt at angles and met at the top, over the photograph, spreading out like protective halberds. The left one read,


The spirit of the June Four martyrs will never decay;
It resides below in the mountains and rivers, above the sun and stars,
and on the right side,


Blood shed in a just cause may not be rewarded for a thousand autumns;
Its fame lies at the gates found at the gates of the capital, its merit found in the whole world.

The government has her under surveillance and won't permit any commemoration of the Tiananmen dead on the Qing Ming day itself. But when Johnson visited her in 2012, it did allow Xu Jue to sweep her husband's and son's grave the preceding week. Johnson is able to follow Xu Jue to the gravesite and reports her ritual tribute.

In memory of the Tiananmen massacre, Johnson retold Xu Jue's story in Thirty Years After Tiananmen: Someone Always Remembers in the Monday New York Times.
...
I hope to write much more about The Souls of China in a future post, but it seemed wrong to let the 30th anniversary pass without notice.
...
Photo by Catherine Henriette, AFP
Posted by janinsanfran at 6:27 AM