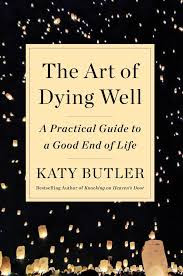 When you reach your seventies, you notice that more people in your life are dying, more immediately. (If you are a San Franciscan, you may have experienced this in the 1980s-90s in a much younger cohort during the height of the HIV crisis, but that's not what I'm talking about.) We all go eventually, but eventually seems to have eased closer.

I'm feeling pretty okay, if a little battered, but seeing friends go inspired me to read The Art of Dying Well: A Practical Guide to a Good End of Life by local journalist Katy Butler. My friend Ronni Bennett, who writes on aging and is recounting the course of her terminal cancer, says she's been inundated with this kind of book. She's had enough. No more. But I had never read one, so I figured I should. I remembered Butler as a smart reporter thirty years ago writing the consumer section for the old Bay Guardian. She still seems a smart, reliable guide -- I would recommend this book for reams of practical tips for living the last stages of life with as much dignity and spiritual equilibrium as any of us may be fortunate to experience.

In developed countries few people die of disease in the first half of life. Most early deaths result from accidents, violence, drug overdoses, and suicide. Cancer becomes a major cause of death in the mid-forties and continues to climb through the fifties and sixties. Deaths from heart disease rise in the sixties and seventies, from lung disease in the eighties, and from dementia in the nineties. All cause physical suffering long before they kill, and all are profoundly shaped by how you live. .. .before you must accept the things you cannot change, you can seize the time to prepare for what's ahead, and change the things you can.

Since we don't want to think about it, some of her suggestions may seem all too mundane -- but we are all tempted to put them off or put the thought aside. Here are a few of her suggestions, all direct quotes unless otherwise noted. It's in the nature of a book on this topic that it overemphasizes how much autonomy and agency any of us will have in our inevitable demise. Having the process go our way is just not how death will come for most of us. Sure, there are sensible things we can do to make the prospect of dying seem a little easier, but ultimately we are powerless in death. That's the reality.

So all the preparations for decline in aging, and the criticism of how poorly the medical system treats the dying, and descriptions of how our culture disables us from contemplating our certain demise, can only go so far. Butler knows that and has written a book that both recognizes its own limits and still tries to assist readers to engage with the uncomfortable truth. Boldly done!
Posted by janinsanfran at 7:00 AM