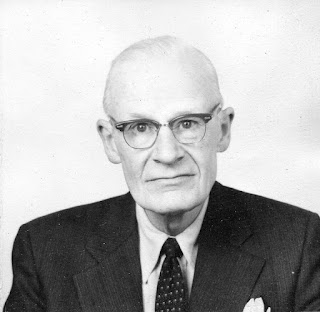 My father, Roger K. Adams, was not a traveler. He didn't see much reason to leave home, since he had a home.

But sometime in the 1970s he finally retired and Mother convinced him to get a passport which led to this image.

Thereupon they flew off on a trip to Ireland, from whence some of their people had immigrated. Mother was curious and usually interested to see new places. They met distant relatives and saw some tourist sites.

After they came home, I asked my father how he'd liked the trip.

"They should put a roof over that country," he growled. Apparently it had rained every day. So much for traveling. Afterward Mother traveled with groups or with me.

Though he often presented as a grouch, actually he was a softie inside. He just felt the need to keep up appearances, as you can see in this picture.
Posted by janinsanfran at 7:00 AM

I wonder why men are like that. I see it so much as they age. They become angry old white men...much like many of our politicians.

Hi Mary - I think the world and their lives didn't turn out as they expected. The Trump-grumps thought a different life was their due. The more interesting ones are more likely to withdraw from any fixation on a broader world. My father leaned to the latter category, when he might have gone a worse way.

How will we Boomers react to disappointment of inflated expectations? That's our question. Aging in a changed world is inherently scary; no, or less, familiar sign posts seem available.