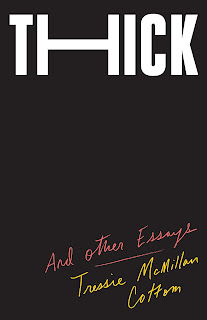 Tressie McMillan Cottom's Thick And Other Essays is a treat -- intellectual and moral candy -- funny, biting, persuasive, and relentless all at once. Cottam is a professor of sociology at Virginia Commonwealth University. Her more academically conventional (and credentialing) work is Lower Ed: The Troubling Rise of For-Profit Colleges in the New Economy which documents how poor people, often of color, have their futures chained to bottomless debt by a system that merely ratifies their unequal chances in life. (Hey -- if Elizabeth Warren wins the big job, maybe she should make Cottam her Secretary of Education.)

This book is something else. Thick consists of eight short essays -- "takes" really -- in which Cottam applies the professional discipline of sociological investigation to her experience of being a southern black girl and woman working her way through our hostile country. She relates the terrible tale of losing her premature infant after three days of unrecognized labor within a medical system designed not to hear a black woman's description of her pain. She skewers the bigotry of academia (and beyond) which would be so much more comfortable with her if she could just be exotic: "Didn't I have any African in my family?" She explores the truth that for black girls, "home is both a refuge and where your most intimate betrayals happen."

More lightly, arguing both seriously and satirically that white "mainstream" media needs black women writing about life's "mundane machinations," she explains about her difficulties in acquiring a larger garbage can:

A few months ago I could not get the City of Richmond to give me a trash can. They call them "supercans," which sounds like it has a lot of cool powers but just means it can hold three Amazon Prime boxes. That is good because I am really working on being a socialist black feminist. It would help if my comrades did not see my Amazon Prime boxes in my trash can. ... I wonder if the county that surrounds my city has the same problem getting supercans. The county is white-ish. The city is black-ish. Something tells me that the level of municipal efficiency I am getting in the city versus the county has something to do with that demographic reality ...

There's more in a pseudo-David Brooks style, but you will have guessed she knew how to work the white people's system, so she got her can. And she nailed both her city and opinion columnizing.

Cottam writes with a consciousness of a calling:

I do what I do because it is what I was put here to do. ... I am living in the most opportune time in black history in the United States and that means, still, that I will die younger, live poorer, risk more exposure to police violence, and be punished by social policy for being a black woman in ways that aren't true for almost any other group in this nation. That is the best it has ever been to be black in America and it is still that statistically bad at the macro level. ... But I have never wanted only to tell powerfully evocative stories. I have wanted to tell evocative stories that become a problem for power. For that, I draw upon data and research.

I enjoyed Thick immensely.
Posted by janinsanfran at 7:25 AM