In 2016, I was not among the many vocal critics of Democratic National Committee (DNC). Though it was obvious that established pols had a candidate, their candidate also won an easy plurality of base support from Democratic Party voters. Majoritarian democracy was served.

But feelings were hurt (with a little boost from Russian active measures and our own unexamined entitlements), so this campaign season, the DNC has enabled this insane hyper-democratic process in which we have 20 "candidates" -- mostly irrelevant -- clogging the debate stage and thereby obstructing the real candidates from engaging with the real conflicts Democrats need to struggle through.

There seem to be six -- and that is still a lot -- who bring necessary strengths and constituencies to Democratic big tent. That's plenty. Get rid of the rest of them.

Here's how I would cull the field after the two debates. The rest are just winning minor celebrity at the expense of the tasks of the moment: disposing of Trump and the rest of the anti-human, anti-democratic GOP apparatus. We have a big job ahead and egos need to take a back seat. 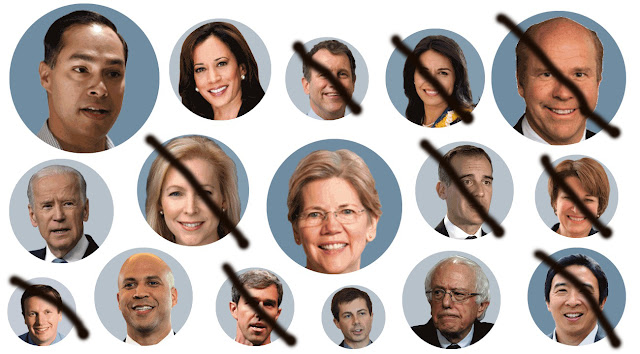 Of course, your mileage may vary.
Posted by janinsanfran at 8:48 AM

Cross out Biden and I am here with you.

I’m ready to cross out Biden, too. Pass the torch, Joe.

Cross out Cory and keep Tulsi, at least for now, so her non-interventionism gets more exposure.

Friends: These are not necessarily my favorites, just the ones I think we have to take seriously because of either the force of their ideas and personalities or the amount of their apparent strength in polls. I will be surprised if the nominee is not one of these. I could easily be wrong. In 2020, what matters is that we elect whoever emerges.

Brandon: I thought Bernie gave a strong, sophisticated foreign policy argument against US imperial pretensions. We don't run the world and we screw it up when we try. And he knows it. None of the others so credibly carry that torch. And I'm not a big Bernie fan. Sigh.

Harris or Warren and maybe Castro as Veep. Agree about Biden. Trump will eat him for lunch