Twenty-five years ago, Erudite Partner and I traveled to New York to attend the 25th anniversary of Stonewall. Stonewall was not quite the first magnitude milestone in gay consciousness on the west coast that it was back east. There's was plenty of lesbian and gay agitation and organization before Stonewall around here. But Stonewall25 was a celebration of progress we didn't want to miss.

We marched in that parade while giving away thousands of free stickers we had printed up that read: Gay Liberation -- A Movement, Not a Market. Folks grabbed them eagerly. Seems a little quaint on the occasion of Stonewall50, doesn't it? I'm not knocking the vast improvements in the life chances of many LGBT people we've won since then. We queers of every variety have needed all of them and still need a good deal more to achieve the freedom to be fully ourselves which we deserve in a free society.

But wandering around San Francisco in the last couple of weeks, it would have been hard not to notice the signs of Pride as commodity branding -- some merely commercial, others a bit transgressive, a few quite charming. Click on any of these for a larger image: 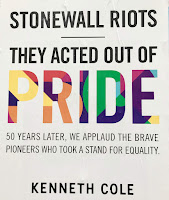 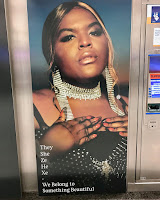 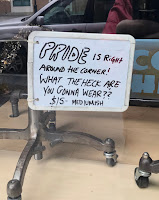 We're still becoming.
Posted by janinsanfran at 7:00 AM