Another concealed victory for democracy 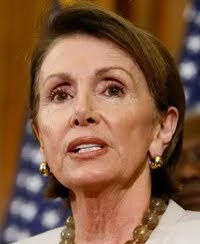 Once again Washington insiders are beginning to catch up with the people. For several years now, the peace movement has been pointing out there's a ready source of cash for available for overcoming and healing the economic damage from Wall Street's collapsed bubble and the grinding unemployment it has left us with. We can take the money from our two failed and unpopular wars and use it where it belongs, on getting people back to work and supporting the general welfare.

Now an establishment pillar is saying the same thing. Democrats in Congress are jousting with Republicans over extending and perhaps enhancing the payroll tax cut that has helped prop up ordinary people's budgets for the last year. This will almost certainly go through much posturing before it gets done. Republicans insist it can't be done unless the lost revenue is paid for somewhere else in the budget.

Now House Minority Leader Nancy Pelosi, an establishment Democrat all the way, is pointing out what we've known for years: the money is there when we decide to take it from the wars.

Pelosi attacked the GOP for demanding that renewing the temporary payroll tax cut be offset, while insisting on large, permanent, unpaid for income tax cuts for wealthy Americans. But that is their demand. And in that context, Pelosi became the first member of Democratic leadership to propose paying for the cuts with funds that were previously expected to pay for wars in Iraq and Afghanistan. ...

“We can easily go get this money out of the Overseas Contingency Fund [war savings]. Easily. Pay for that, pay for [the Medicare doc fix]. We shouldn’t pay for unemployment insurance — it’s an emergency. Money’s been paid into it. As money is continued to be paid into it, it evens out. So we shouldn’t have to offset that. But the other two, we can just go to [war savings] and get it done. If you insist on paying for that.”

And Pelosi isn't the only Dem talking this way. They are all getting it.

…On MSNBC today, conservative Democratic Rep. Jason Altmire of Pennsylvania outlined a way for the Republicans to take the issue off the table with minimal fuss: if they agree to use the war savings to pay for renewing the payroll tax cut, Democrats will soft pedal their demand to deepen it.

“If you want to go into this overseas contingency fund which some people view as an accounting gimmick but it’s going to be used for something we can look at that,” Altmire said. “[I]t’s $120 billion cost just to extend the current payroll tax which is why I say if you extend it beyond that you get into big numbers [and] I think that’s where we’re going to end up.”

Raiding the war funding for domestic use is getting to be Washington orthodoxy.

They are never going to tell the majority of us who are peaceniks that we've wrenched elite policies around to our preferred direction. But our consistent, longterm efforts are changing the definitions of the possible and necessary. That's what victory for the 99 percent in the economic arena will look like as well.
Posted by janinsanfran at 9:37 AM