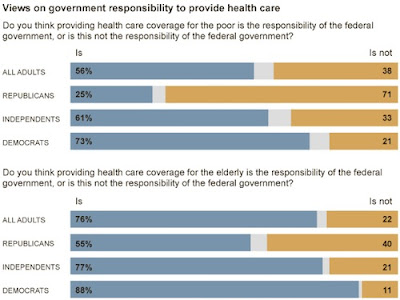 Good news about the 2010 health insurance reform I didn't know -- and I thought I was paying close attention. Despite being far too solicitous to the interests of insurers and of pharmaceutical, hospital and medical entrepreneurs, Obamacare pays for providing insurance to larger fraction of us by breaking one of our currents taboos. It raises taxes on rich people. Yes, though its sponsors didn't trumpet this in any way that most of us would notice, that's part of how the reform works. No wonder Republicans are so opposed; the health reform gores their sacred bulls.

Here's the exchange from one of Terry Gross' Fresh Air interviews on NPR that clued me in.

TERRY GROSS: If you're just joining us, my guest is Tim Dickinson. He's the national political correspondent for Rolling Stone and his article in the current edition is about Republican tax strategy and what the effect has been on Americans of tax cuts over the years.

You write that one of the reasons Republicans don't like Obamacare is that the top 400 taxpayers would be contributing an average of $11 million each and that, you know, the Obama health care plan is financed in part by increasing Medicare taxes on the wealthy, including new taxes on investment income. So can you elaborate on the Republican concerns about the funding of Obama's health care reform plan?

DICKINSON: This is not something that received a great deal of attention when the Obamacare was put through. But the primary funding mechanism is these new Medicare taxes. And for the first time there's going to be a 3.8 percent tax on investment income for the wealthiest. And so this has the effect of raising capital gains taxes starting in 2014 from 15 percent to 18.8 percent, I guess. And then if the Bush tax cuts are allowed to expire, you'll have an effective tax rate of above 23 percent on capital gains, which will be a higher rate on capital gains than at any time since 1997 when these - when sort of the initial campaign of cutting taxes on investment income began. And so this is obviously a matter of great consternation to the nation's investor class, and the Republicans are quite responsive to those concerns.

You'd think Democrats would want the 99 percent to know they'd done something so sensible. It will be interesting to see whether, as we enter an electoral season in which overcoming economic inequality is supposed to be a Democratic campaign theme, they'll be willing to cop to this accomplishment. You get the sense they tried to sneak it through under the radar. A lot of us might approve of getting the money we need from those who have it, if only we knew.
Posted by janinsanfran at 7:00 AM