This is what a political opening seized looks like: New Deal history 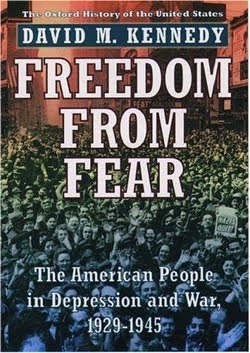 At this time of year, I'm always tempted to announce the book I've enjoyed, or admired, or learned most from over the past year. Some years, I resist this silly temptation, but today I won't. My "Best Book" for 2011 was Stanford historian David M. Kennedy's Freedom from Fear: The American People in Depression and War, 1929-1945.

Thinking about possible choices, I was a little surprised to realize that several grand historical surveys had made the greatest impression on me. This is not how history is supposed to be written by "serious" historians; most academic history digs into a niche in past time, striving for accurate description of details we can never fully know, often getting lost in minutia. Grand sweeping tomes seem excessively ambitious, a dangerously pretentious over-reach. One of the attractions of Kennedy's book is that he dared to chronicle such a long and episodically diverging period and got away with it. At the very least, it would have been possible to envision quite separate volumes about domestic concerns from 1929-39 and the World War II years that followed. But he makes them feel a single epoch, just as they were lived. I was often awed by how gracefully he wove in all the themes that a contemporary historian wants to be sure to include -- women's experience, the implications on events of the country's historic racism, the tiny gay minority who occasionally stuck their heads up in this period. This is not easy as the records were created and left by others.
***
Over time I'll pull other tidbits from Kennedy's opus to try to get perspective on our own times, but right now I want to share the most significant insight I took away from this volume: Franklin Delano Roosevelt's New Deal program was not only an effort to restore employment to pre-Depression levels; he was out to change and stabilize the country's economic and political realities much more broadly. Here's Kennedy explaining:

Why did [Roosevelt] reject Roy Howard's [a newspaper chain owner] counsel that "there can be no real recovery until the fears of business have been allayed" and instead insist on gratuitously provoking business and thickening its anxiety? Those questions elude easy answers if… one assumes that economic recovery was Roosevelt's highest priority. But if one recognizes that lasting social reform and durable political realignment were at least equally important items on Roosevelt's agenda, then some of the mystery lifts.

I report that and think -- well, isn't that obvious? No it is not. Neither Barack Obama nor his critics seem to be responding to the Lesser Depression with this level of ambition. The 2009 stimulus and subsequent muddled economic pump-priming are aimed at restoring the status quo from before the bubble of the 00s, not rebuilding something stronger, fairer and better. Pressures -- the 99 percent movement and acknowledgment of rising inequality -- are mounting, but there's no sign that elites yet feel they have no choice but to encourage a new plateau of stability.

It's worth following Kennedy's description of how Roosevelt moved from plugging holes as banks collapsed in the first days of his administration to pushing through a program for long term economic stability. A significant feature was something we're not even considering these day: there was a great mass of people for whom the Depression was nothing new, just as the Lesser Depression is today, though since Bill Clinton we've learned not to even mention the perennially poor. Eleanor Roosevelt's reporter friend was sent out to chronicle life in the country outside the bright lights of the big cities -- Washington could do with some of that today.

As Lorena Hickok's travels progressed, she gradually came to acknowledge the sobering reality that for many Americans the Great Depression brought times only a little harder than usual. … The "old poor" were among the Depression's most ravaged victims, but it was not the Depression that had impoverished them. They were the "one-third of a nation" that Franklin Roosevelt would describe in 1937 as chronically "ill-housed, ill-clad, ill-nourished." By suddenly threatening to push millions of other Americans into their wretched condition, the Depression pried open a narrow window of political opportunity to do something at last on behalf of that long-suffering one third, and in the process to redefine the very character of America.

It took elites awhile, as it has since the financial panic of 2009, to understand that this wasn't just a temporary economic hiccup.

[The President's advisor Harry] Hopkins himself was soon speaking of workers who had passed into "an occupational oblivion from which they will never be rescued by private industry. . . . Until the time comes, if it ever comes," he argued, "when industry and business can absorb all able-bodied workers -- and that time seems to grow more distant with improvements in management and technology -- we shall have with us large numbers of the unemployed. Intelligent people have long since left behind them," Hopkins continued, "the notion that. . . the unemployed will disappear as dramatically as they made their appearance after 1929. . . . For them a security program is the only answer."

In response to gathering pressure from the left (LaFollete, Sinclair Lewis, unions and Communists) and the right (Father Coughlin and Huey Long) Roosevelt pushed through what we think of as the New Deal in the second two years of his first term.

The unifying design of that program took different forms in different sectors of the nation's life, but the overall pattern of the Second New Deal taking shape in 1935 was becoming clear. In the social realm, the dominant motif was security; in the economic realm, regulation (which was security by another name); and in the physical realm, planned development. In all those domains the common objective was stability. No other aspiration more deeply informed the Second New Deal, and no other achievement better represented the New Deal's lasting legacy. Roosevelt now sought not simply recovery, nor merely relief, nor even the perpetual economic growth that would constitute a later generation's social and political holy grail. Roosevelt sought instead a new framework for American life, something "totally other" than what had gone before…, something that would permit the steadying hand of "that organized control we call government" to sustain balance and equity and orderliness throughout American society. Roosevelt's dream was the old progressive dream of wringing order out of chaos, seeking mastery rather than accepting drift, imparting to ordinary Americans at least some measure of the kind of predictability to their lives that was the birthright of the Roosevelts and the class of patrician squires to which they belonged. …It was a dream now brought within reach of realization by that same Depression and by the sense of possibility and the political fluidity it induced.

Will the country ever get there again?
***
"Honorable mentions" for 2011's "best book":
Paris 1919
Empire of Liberty
In hard times, history comforts. Somehow our forbears muddled through; we might too.
Posted by janinsanfran at 6:00 AM

I just added this to my "gotta read" list. Maybe Obama should read it, too. Thanks!!!