Newt's people: perhaps reliving their own hope and change moment? 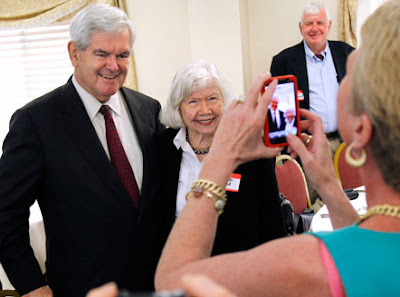 It looks as if the Newt Gingrich balloon is leaking hot air. Apparently attack ads from the Romney and Ron Paul campaigns are doing their job in Iowa. Good riddance. The nation has real problems. We don't need an egomaniac blowhard dominating the national stage for even two weeks.

I mean the guy is a crackpot. If he were elected President, he claims he'd send the sheriff for judges whose decisions crossed him, put poor kids to work as janitors in their schools, and blow up Iran's mosques which he describes as hiding tunnels for a nuclear bomb project.

Who were the people whose enthusiasms fueled the Newt balloon? Okay, so he is not Mitt Romney and that's enough to attract a lot of Republican voters. Understandable, sort of. Mitt's another ambitious slick talker, who lacks any discernible principles or personal appeal.

Gingrich is attracting a disproportionate share of the senior vote across the board. And given that Iowa and Florida are two of the five oldest states, there’s plenty to recommend the strategy. Indeed, the most dramatic movement for Gingrich so far is in Florida, where one PPP poll showed him with a 47-17 lead over Romney.

Why would some fraction of my age peers and their elders have such fondness for the former Speaker?

I'm terribly afraid these are folks for whom Newt Gingrich was once Mr. Hope and Change. Conservatives had many victories in the era between 1954 and 1994. Their permanent Cold War against the Soviet Union became the unquestioned national stance. Richard Nixon stoked the culture wars that still divide us. And at the end of that time, Ronald Reagan and Bush the First chipped away at the national safety net. But they faced an obstacle: for four solid decades, Democrats controlled the House of Representatives and hence retained a voice in national policies even under Republican presidents.

The reasons for that long dominance were not mostly anything that would thrill current progressives: Democrats held the House thanks to state gerrymandering, incumbency and the near life tenure of a mass of Southern white Democrats who resisted racial and other social changes. But hang on they did.

For conservatives of a certain age, Newt was the guy who broke the Democratic stranglehold on Congress. He was the guy who would bring a new era of conservative power that would do away with taxes, regulations and any international restraint on U.S. imperial dominance. I imagine that 1994 election that gave him the Speaker's gavel felt to them something like 2008 felt to many Obama voters who were desperate for a new direction after the squalor and shame of the Bush years.

Newt's enthusiasts didn't get all they wanted, though the one percent made out like the bandits they are from the new political configuration. Newt crashed and burned within a few years, victim of personal overreach and personal sleaze -- I mean the guy tried to impeach a sitting President for a blow job while having an affair with an aide unbeknownst to his second wife.

But Newt's people remember the rush when it seemed, for a minute, they'd overturned the political universe. They want that feeling again.

It's all enough to make me even more dubious than Obama has done about political evangelists of hope and change.

Posted by janinsanfran at 9:22 AM