Roald Amundsen would have made a great electoral organizer 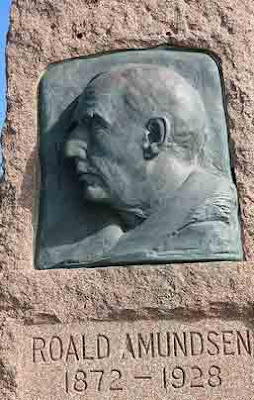 Yesterday was the 100th anniversary of Norwegian explorer Roald Amundsen's completion of his trek to be first to reach the South Pole. Amundsen outraced the British explorer Robert Scott who arrived at that notional geographical location a month later and died while returning to base across Antarctica. Among English speakers, Scott's doomed quest to be the first to the pole became the stuff of romantic adventure tales. Amundsen's efficient expedition was less heralded.

I knew next to nothing about Amundsen until I happened across an anniversary article by Mark Jenkins in Outside that provided fascinating food for thought. Old Amundsen knew a thing or two.

I like that. I try to put it in practice in my work on progressive campaigns. “Angst and drama just reveal bad planning,” I say.

Attractively, Amundsen modeled overcoming difficulties and impediments by paying attention to the people who knew how to traverse the unfamiliar terrain at the poles, the native inhabitants of these forbidding environments.

Amundsen learned about dogsledding and igloo building from the Netsilik Inuits. What he saw impressed upon him the hard facts of polar travel: fresh meat could prevent ­scurvy (a disease caused by a lack of vitamin C), dogs and sleds were perfect for the poles, skis were fast and efficient over great distances.

…Amundsen was far ahead of his time, having the ­genius and openness to master the indigenous ­culture’s ancient survival skills—an ability not simply ignored but often disdained by other explorers of the day.

Who knows better than the people who live in a place how to survive and thrive in it? I try to remember this when working to bring message and mobilization to diverse groups within the population of California. If we want to talk with people who often live at the margins of the mainstream, we need to find who they already listen to and bring those leaders into the core of our efforts. We need to speak their native languages, often literally in a state where 43 percent of us speak a language other than English at home.

Amundsen was obviously a competitive, driven man. He misled and even taunted Scott about the progress of his plans when they were both still within range of communications. But when it came to the crunch, he was about accomplishment, not heroics.

After reaching the South Pole, Amundsen and his team easily cruised back to base camp, covering 700 miles in just six weeks. In all, they had skied 1,400 miles in 99 days. No one had died; hardly anyone had been sick. There was some frostbite, but no one lost fingers or toes. Amundsen had done everything possible to remove drama and danger from his expeditions, and for that he was, in a strange but tangible way, punished. Despite the fact that his South Pole expedition was the apotheosis of elegance and efficiency, arguably the finest expedition ever accomplished by man, he would be all but forgotten outside of Norway …

You know, for good political organizers, working so successfully that victory seems as natural as the sun rising is the highest success. The political consultants you hear about -- the Scotts -- the ones who make themselves the story instead of the cause or candidate, they may suck up a lot of oxygen, but they are not necessarily the brightest, the best or even the most successful.
***
The photo is of a monument to Amundsen in San Francisco's Golden Gate Park. I never knew why we had such a thing adjacent to the Beach Chalet until I researched this article. Apparently Amundsen's head is looking toward where his sloop, the Gjøa, was on display from 1909 until 1972. In this vessel, the explorer had been the first to navigate a Northwest Passage through the Arctic Sea from the Atlantic to the Pacific coast of North America. The old wooden ship decayed badly in San Francisco and during the middle of the last century became a refuge for LSD-dropping hippies. The Norwegians reclaimed the vessel and it is now on display, restored, in a museum in Oslo. But we still have the head of Amundsen, gazing north.
Posted by janinsanfran at 5:00 AM

Great history, and even better analogies.

"Cold Recall: Reflections of a Polar Explorer" is currently on exhibit at the Nordic Heritage Museum in Seattle. We saw it at the Maritime Museum in Vancouver, BC. The not-large exhibit "showcases images from the hand-colored lantern slides that Roald Amundsen used in public lectures about his expedition to the South Pole. Texts from Amundsen’s own manuscripts from these lectures offer a compelling first-person account of this exciting journey." Looks like the exhibit is traveling all over, but I couldn't find a listing of all exhibits. The exhibit was produced by the Fram Museum in Oslo.