Reflections on the "day that will live in infamy" -- and today 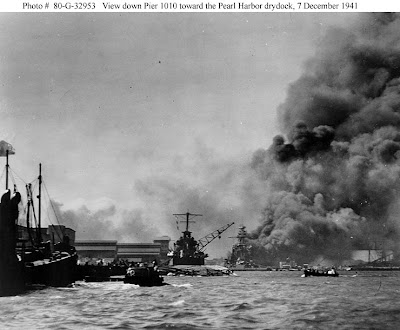 Seventy years ago today, my parents' generation lived their 9/11 moment. The Japanese surprise attack on Pearl Harbor decimated the U.S. Pacific fleet, killed thousands, and served notice that the United States was not safe from all enemies.

I find it interesting to compare two themes from post-Pearl Harbor life that both live on in the post-9/11 USA.

Here's how Eleanor Roosevelt greeted the outbreak of a war she had long feared in her newspaper column of December 8, 1941.

Now we know where we are. The work for those who are at home seems to be obvious. First, to do our own job, whatever it is, as well as we can possibly do it. Second, to add to it everything we can do in the way of civilian defense. Now, at last, every community must go to work to build up protections from attack.

We must build up the best possible community services, so that all of our people may feel secure because they know we are standing together and that whatever problems have to be met, will be met by the community and not one lone individual. There is no weakness and insecurity when once this is understood.

That all-in-this- together spirit of shared sacrifice is certainly a part of why World War II is still remembered as "the Good War."

Yet, as historian David M. Kennedy points out in Freedom from Fear: The American People in Depression and War, 1929-1945 there are good material reasons that horrible war acquired a rosy glow in retrospect.

Thanks to the government's cost-plus contracting practices and the ubiquitous availability of overtime, wartime jobs paid fabulously well, especially for Americans who had suffered through the cramped years of the 1930s.

… Most Americans had never had it so good. They started half a million new businesses. They went to movies and restaurants with unhabitual frequency. They bought books, recordings, cosmetics, pharmaceuticals, jewelry, and liquor in record volumes.

… Retail sales ascended to a record high in 1943 and then went higher still in 1944· On a poignantly symbolic date, December 7, 1944, the third anniversary of Pearl Harbor, the thousands of cash registers in the Macy's department store chain rang up the highest volume of sales in the giant retailer's history.

There's nothing new in the national enthusiasm for reports of the wonders of Black Friday and Cyber Monday shopping.

Kennedy goes on to explain that the orientation among U.S. engineers and industrialists to choose quantity over quality, in contrast to the Germans, was a key factor in winning the "war of machines" and also in fully utilizing an undereducated and wildly diverse U.S. workforce. These enduring traits of U.S. capitalism served most of us well in the post-war decades, but clearly don't serve the common good today.

Today, there simply aren't as many routinized, simplified jobs as workers who need them. I learned from reading Kennedy about war production just how great a cultural transformation in historic U.S. capitalist practice may be required to return to the 99 percent to a decent share of the nation's wealth. Our economy, even in its best moments, has never been set up to serve the common good.
*** 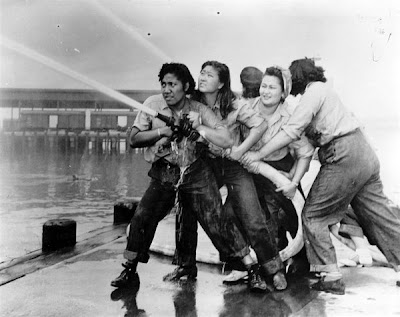 People are passing around this wonderful photo from the day, wondering whether any of these women are still alive. More here.
Posted by janinsanfran at 5:00 AM