If animals could talk ... 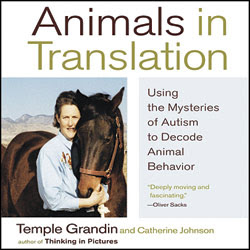 There's an enduring and endearing legend in European folklore that on Christmas Eve, in commemoration of the Event in the stable, animals for one night possess human speech.

It is said that humans do not want to actually hear what the animals are saying because, even though they have the gift of speech just one day a year, they usually don’t have many kind things to say about their human masters.

Temple Grandin, writing with Catherine Johnson, in Animals in Translation offers a different window into what animals might be saying if they could speak and we could understand.

Temple Grandin is a scientific student of animal behavior whose prescriptions have become the standard for large scale animal farming in the United States -- she credits being autistic with helping her make sense of what she observes in animal behavior. Here's how she explains:

Animals in Translation comes out of the forty years I've spent with animals. It's different from any other book I've read about animals, mostly because I'm different from every other professional who works with animals. Autistic people can think the way animals think. Of course, we also think the way people think -- we aren't that different from normal humans. Autism is a kind of way station on the road from animals to humans, which puts autistic people like me in a perfect position to translate "animal talk" into English. I can tell people why their animals are doing the things they do.

Grandin has a lot to tell us. Anyone at all interested in animal behavior will be interested in this book, though she seems to me more attuned to dogs and large animals than the critters I see more of in my life that is, domestic cats. Don't I wish I knw what they were thinking. And Grandin sure can make us think. Consider this:

With dolphins, researchers have pretty much reached the conclusion that much of the killing they do serves no evolutionary purpose. Dolphins will slaughter hundreds of porpoises at a time. The only imaginable evolutionary reason for this would be if porpoises compete with dolphins for the same scarce resources, like food. But they don't. Porpoises eat different food than dolphins do. Killing a porpoise doesn't increase a dolphin's chances of surviving and reproducing in any way. The only conclusion is that dolphins kill porpoises because they want to.

I don't know why animal violence happens, but when I read through the research literature I'm struck by the fact that the animals with the most complex brains are also the ones who engage in some of the nastiest behavior. I suspect people and animals probably pay a price for having a complex brain. For one thing, in a complex brain there may be more opportunities for wiring mistakes that will lead to vicious behavior. Another possibility is that since a more complex brain provides greater flexibility of behavior, animals with complex brains become free to develop new behaviors that will be good, bad, or in between. Human beings are capable of great love and sacrifice, but they are also capable of profound cruelty. Maybe animals are, too.

Grandin is so insightful and refreshing for a quality of observation well-exemplified in that passage: she treats human and animal behavior as very similar -- and equal -- mysteries. It's a stance that yields some very thought provoking moments. For example, she tries to answer the human question: are animals as smart as people?

Grandin starts with the observation that humans think smarts equate with language. But there are people who grow to adulthood and function without language -- they are born deaf and live in places where they have no exposure to the language of signs. So she plumbs accounts of the human language-less.

There are probably lots of language-less people in the world. Usually they are people who were born deaf into communities too small to have anyone who spoke sign language, and too poor to have schools for the deaf. But there are also some language-less people who were born into middle-class American homes but were never taught sign. Their brains are normal, and they had normal parents with normal incomes who loved them. They weren't poor and they weren't abused. The only reason they don't have language is that they were never exposed to language.

Susan [Schaller] became interested in language-less people when she volunteered to teach Ildefonso, a deaf mute Mexican immigrant who was raised in a town that had no education for deaf children. A Man Without Words is the story of her work with him. Susan discovered that Ildefonso had no concept of language at all. ...

The main difference between Ildefonso and people who have language is that he was missing a layer of abstract thinking. For instance, he didn't have the categories of real and fake. … He also didn't have just and unjust as abstract categories. It's not that he didn't have morals or a conscience. Susan doesn't say a lot about this, but she writes that Ildefonso became upset one day when she kept insisting on paying for his lunch after he had signed that he wanted to pay. Ildefonso got more and more angry until finally he signed, "God. Friend. Burrito buy I."

"He connected God and friend and placed them above burrito buying," Susan writes. "His anger was that of a religious instructor. I was properly rebuked for my concern for the material world. Who had more money was trivial." Later on he asked her what "God" meant, but he had already figured it out on his own. Susan writes that he had guessed that the word "God" stood for "unseen greatness, apart from and more important than the tangible stuff in front of us."

Although Ildefonso had the idea that there was something greater than the material world, he didn't seem to have any concept of human justice. He had no idea whether it was just or unjust for the green men [immigration police] to catch him and take him back to Mexico; he just knew that's what the green men did, so he needed to stay away from the green men. He was trying to understand the rules, without realizing there were principles behind the rules.

Ildefonso was an innocent. He didn't see all the good and bad that people do, and he didn't know there could be good and bad rules, either. After he learned language, he was sad to learn of the terrible things people do. Animals are innocents, too. Even when animals are treated badly by humans, or see other animals treated badly by humans, they don't seem to develop the abstract categories of just and unjust. Like Ildefonso, animals try to learn the rules without seeming to realize there are principles behind the rules. Since they don't know there are principles underlying the rules they don't realize that the rule itself can be just or unjust, or that a person could be breaking abstract principles of justice. Animals live much closer to the plain facts of the situation.
But the important thing to realize is that Ildefonso's innocence was not the same thing as being stupid, or unable to think. Ildefonso wasn't stupid, and he functioned as a person of normal intelligence and reasoning ability or even above-average intelligence, given that he had been able to immigrate to a foreign country, find work, and manage his life while struggling with a huge disability.

This means that when it comes to animals, we should not equate innocence with lack of intelligence. The fact that a dog never rejects a nasty owner doesn't make him stupid. …

… The lesson from Ildefonso is that although language does make thought more abstract, without language you can think more abstract thoughts than probably anyone has believed possible.

I think for normal people language is probably a kind of filter. One of the biggest challenges for an animal or an autistic person is dealing with the barrage of details from the environment. Normal people with language don't have to see all those details consciously. But I see them, and animals do, too. The details never go away, either. If I think of the word "bowl," I instantly see many different bowls in my imagination, such as a ceramic bowl on my desk, the soup bowl at a restaurant I ate at last Sunday, my aunt's salad bowl with her cat sleeping in it, and the Super Bowl football game. I think that probably happens to animals, too, and 1 wonder what Ildefonso's visual memory was like while he was still a language-less person.

There's a picture: most humans as creatures who constantly filter and organize an onrushing flood of signals, largely unconsciously and apparently effortlessly. I sometimes wonder whether, because we can, we are predisposed to multiply the layers of complexity and and number of stimuli until we either train our faculties to deal with them or our brains and societies frizzle in the attempt. Temple Grandin makes me think about things like that.

Posted by janinsanfran at 8:38 AM

There's a recent biographical TV movie called "Temple Grandin" with Clare Danes that is phenomenally good, partly because the filmmakers try to make the viewer see the world through Grandin's eyes, and to some extent succeed. If you haven't seen it, check it out.

You have happened upon one of my most beloved of books. A friend once told me that you can learn much more about a person from their behavior than from their words. Made me pay more attention and has saved my rear end more than once. About us humans, its our human arrogance that has us thinking/assuming that other species can't communicate with each other or us, or, for lack of an oppossable thumb, can't make or use tools. We are the ones that need to pay better attention.