Laws we could do without

This week John G. Lawrence, who involuntarily lent his name the Supreme Court decision that legalized consensual, private gay sex in 2003, died privately as he had lived. Lawrence and his friend Tyron Garner had their bedroom invaded by Texas police and were dragged off to the station in their underwear to be convicted of the misdemeanor sodomy in 1998. According the Lawrence's obituary, Lawrence was not an activist, just pissed off at how he was treated. His name ended up on the decision that legalized the ordinary lives of LGBT people. 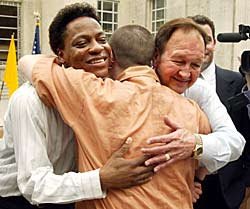 A significant fact about this landmark case seldom mentioned then or even now is obvious in this picture of Garner and Lawrence celebrating the Supreme Court decision with a supporter. Would Texas police have invoked the sodomy law if the couple had been of the same race? There's no way to know, but in 1998 prosecutions for "sodomy" were already few and far between.

The obituary quotes Justice Anthony Kennedy's opinion in the case:

The U.S. Constitution's framers "knew times can blind us to certain truths and later generations can see that laws once thought necessary and proper in fact serve only to oppress," Kennedy wrote.

That got me to thinking -- what current laws will look to future generations as no longer "necessary and proper," but instead wrong-headed and oppressive? Naturally my nominations reflect my politics and I may be oblivious to some possibilities, but here's what came to mind: What suggestions for conventional yet wrong-headed laws come to mind for readers?
Posted by janinsanfran at 6:34 AM