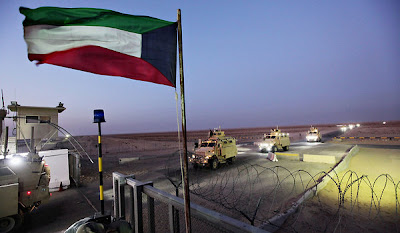 The last American military convoy crossed over the border from Iraq into Kuwait on Sunday. Mario Tama/Getty Images/New York Times
If anyone doubted that the United States is leaving Iraq like an embarrassed dog hiding its tail between its legs, check out this:

For security reasons, the last soldiers made no time for goodbyes to Iraqis with whom they had become acquainted. To keep details of the final trip secret from insurgents, interpreters for the last unit to leave the base called local tribal sheiks and government leaders on Saturday morning and conveyed that business would go on as usual, not letting on that all the Americans would soon be gone.

Many troops wondered how the Iraqis, whom they had worked closely with and trained over the past year, would react when they awoke on Sunday to find that the remaining American troops on the base had left without saying anything.

“The Iraqis are going to wake up in the morning and nobody will be there,” said a soldier who only identified himself as Specialist Joseph. He said he had immigrated to the United States from Iraq in 2009 and enlisted a year later, and refused to give his full name because he worried for his family’s safety.

Somehow I doubt these Iraqis were quite as surprised as their unwelcome guests thought. We always did underestimate this ancient people.

***
Andrew J. Bacevich, now Professor of International Relations and History at Boston University and formerly a U.S. Army Colonel, contributed to a Council on Foreign Relations roundtable on the question Was the Iraq War Worth It?


The disastrous legacy of the Iraq War extends beyond treasure squandered and lives lost or shattered. Central to that legacy has been Washington's decisive and seemingly irrevocable abandonment of any semblance of self-restraint regarding the use of violence as an instrument of statecraft. With all remaining prudential, normative, and constitutional barriers to the use of force having now been set aside, war has become a normal condition, something that the great majority of Americans accept without complaint. War is U.S.

One senses that this was what the likes of [Vice President Dick] Cheney, [Secretary of Defense Donald] Rumsfeld, and [Deputy Secretary of Defense Paul] Wolfowitz (urged on by militarists cheering from the sidelines and with George W. Bush serving as their enabler) intended all along. By leaving intact and even enlarging the policies that his predecessor had inaugurated, President Barack Obama has handed these militarists an unearned victory. As they drag themselves from one "overseas contingency operation" to the next, American soldiers must reckon with the consequences. So too will the somnolent American people be obliged to do, perhaps sooner than they think.

I think he has aptly summarized the meaning of our Iraq adventure for those not so unfortunate to have had to live it.
Posted by janinsanfran at 2:24 PM

Andrew Bacevich is a very wise man -- I have found him to be an sensible source on the military.