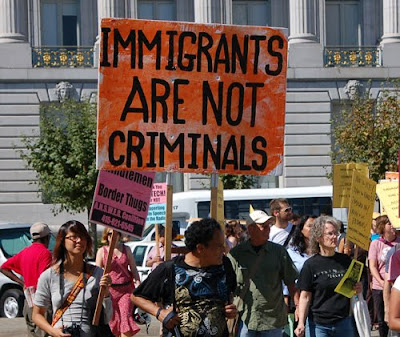 Last Sunday at church, a friend asked our prayers for "Antonio" who will soon die because he has been denied a heart transplant. The friend is a medical doctor and an ethics official at a local hospital. She has worked feverishly and successfully with Antonio's cardiologist to round up doctors and the facilities to carry out the operation.

Antonio is only marginally a paying patient, because he is an undocumented immigrant. But he's exactly the sort of patient who does well with a donated heart: he's relatively young (40ish), employed, and shows every sign being able to comply with aftercare protocols. There's really only one thing standing between him and a good place on the transplant list: no part of the "health safety net" will pay for the anti-rejection drugs that would keep his new heart beating. It would be irresponsible to place him on a transplant list if the heart might not survive for lack of follow up care. So Antonio's doctors are now scrambling to make visa arrangements so that some of his family can visit him before he dies.

A story by ace reporter Nina Bernstein in the New York Times makes it clear the Antonio's plight is not unique.

Without treatment to replace his failing kidneys, doctors knew, the man in Bellevue hospital would die. He was a waiter in his early 30s, a husband and father of two, so well liked at the Manhattan restaurant where he had worked for a decade that everyone from the customers to the dishwasher was donating money to help his family.

He was also an illegal immigrant. So when his younger brother volunteered to donate a kidney to restore him to normal life, they encountered a health care paradox: the government would pay for a lifetime of dialysis, costing $75,000 a year, but not for the $100,000 transplant that would make it unnecessary.

We hear a lot about how the U.S. medical system is inefficient and excessively costly. We could do with more awareness that this jerry-built edifice is also simply insane -- and deadly.
Posted by janinsanfran at 12:53 PM

Having gone without medical for many years, this sort of thing terrifies me. Now the idiots are trying to dismantle Medicare . . . sigh.

The only answer is single payer

Both situations are inexcusable and shameful. Thanks for putting this issue on the front burner, Jan.