An ignominious end to a war that never should have been 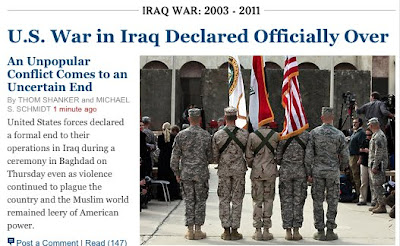 This just went up on the New York Times digital front page.
***
The Times reported yesterday on recently uncovered (left behind to be burned!) interviews with Marines about the Haditha massacre in which our soldiers apparently murdered over 20 unarmed civilians. Not surprisingly, the event became symbolic of why Iraq refused to allow U.S. troops, who would not have been subject to Iraqi law, to remain in their country after the war's official end.

“I mean, whether it’s a result of our action or other action, you know, discovering 20 bodies, throats slit, 20 bodies, you know, beheaded, 20 bodies here, 20 bodies there,” Col. Thomas Cariker, a commander in Anbar Province at the time, told investigators as he described the chaos of Iraq. At times, he said, deaths were caused by “grenade attacks on a checkpoint and, you know, collateral with civilians.”

The 400 pages of interrogations, once closely guarded as secrets of war, were supposed to have been destroyed as the last American troops prepare to leave Iraq. Instead, they were discovered along with reams of other classified documents, including military maps showing helicopter routes and radar capabilities, by a reporter for The New York Times at a junkyard outside Baghdad. An attendant was burning them as fuel to cook a dinner of smoked carp.

The documents — many marked secret — form part of the military’s internal investigation, and confirm much of what happened at Haditha, a Euphrates River town where Marines killed 24 Iraqis, including a 76-year-old man in a wheelchair, women and children, some just toddlers.

Haditha became a defining moment of the war, helping cement an enduring Iraqi distrust of the United States and a resentment that not one Marine has been convicted.

***
One of the most succinct summations of the Iraq war's conclusion that I've seen appeared in the magazine Christian Century.

The Iraq war ends without a peace treaty or victory march. This misadventure has cost over $800 billion so far and taken the lives of more than 4,000 American soldiers and as many as 600,000 Iraqis. It represents a defeat for the neoconservative dream of bringing liberty and American dominance to the Middle East by a military invasion. Ironically, the war decreased American influence in the region and put Iran in a stronger position relative to its neighbors. Al-Qaeda is alive and well in Iraq, where it continues to be a menace, attacking and killing civilians, police officers and soldiers.

That paragraph introduces an editorial calling for an end to our Afghanistan war as well.
Posted by janinsanfran at 7:21 AM

All in all, US civilians are fortunate not to experience of War but its financial repercussions. I wonder if compensations had been paid to the people of Vietnam, Cambodia, Laos, if any US government would have dared launch new Wars. Such compensations might have been cheaper than the cost of the war on Iraq..