An Obamacare rant: fix your own damn market! 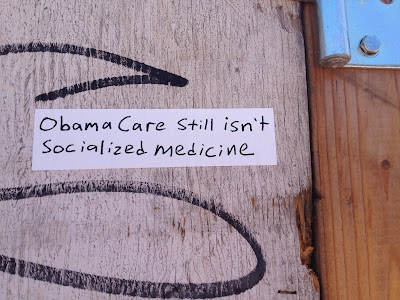 Don't get me wrong. I'm glad we have Obamacare. A lot of people, millions of us, have some kind of health insurance thanks to the Affordable Care Act (ACA). Nobody has proved that people are any healthier because of this, but the best study shows that the newly insured are more likely to get medical care when they are sick and far less likely to be bankrupted by a sudden illness. That's all to the good.

But that does not mean that by succumbing to the political and economic pressures to preserve our cruel and wasteful private market health system, Obamacare isn't a jerry-built Rube Goldberg edifice. Margot Sanger-Katz explains that the Department of Health and Human Services is proposing a regulation to "encourage" people who buy coverage through the insurance exchanges to go through the laborious process of re-evaluating which plan will be cheapest and will give them the medical access they want every year.

Now cheap is good. But changing insurance companies can often mean changing doctors, hospitals, relationships, maybe medications -- why would we want people to have to go through all that every year?

The proposal highlights a key feature of the Affordable Care Act’s marketplaces, which has both benefits and drawbacks. It relies on competition between private health plans to keep prices low. That means that shoppers in many markets can find good deals, but only if they’re willing to stomach the disruption of switching insurance every year.

That is, unless individual citizens are willing to unsettle their medical arrangements annually, there will be less competition between insurers. If people are loath to change insurers, they'll settle in with one that more or less suits them and only change if they have to.

Sick people are not consumers making choices like which new electronic widget to buy. When serious illness hits, our lives are at stake. As was the case before Obamacare, what chance we have of receiving good care should not be determined by how good we are at jumping through bureaucratic hoops. Health care really is a human right; preserving the health of a dysfunctional profit-seeking market is just the detritus of an anti-human social system.
Posted by janinsanfran at 5:00 AM

I am not sure how they propose to encourage. We are notified every November (and were when on corporate insurance plans) of the options. If we didn't change anything, we'd keep what we had. Still how it has worked with our Advantage plan which is tied to Medicare. Are they proposing something different? Our system looked the same this year as last-- so far.

We are urging a friend to go with Kaiser, but he is very attached to his doc, who is an incompetent alcoholic. He lives with the myth of good old small town doc so-and-so and is shy of meeting new doctors who might tell him to stop smoking and drinking. (!)He's very sick and desperately needs better care, but he clings to this relationship.
I explained to him about how at Kaiser how he would always have an assigned doctor, how the pharmacy and the blood lab and specialists are all to be found in the same place, etc. He would need help to negotiate the system, help we would gladly provide. This is managed care, which I think is the best way to go with the medical system such a mess and causing so much uproar right now. A physician friend thinks he should join Kaiser too, and it cost him something to say that, since he has always been an independent practitioner. He has one of those Cadillac plans, and his premiums are soaring. I hope he'll lean on him too about this and maybe think about joining Kaiser himself.
We need single payer with tough regulation of costs. We need to get rid of insurance companies, which are only about profit, not about delivering care.
Me, I'm happy with Kaiser. I get what I need but I don't get more than I need.

Rain: HHS is hoping to induce changes (cheaper, better?) in the offered insurance plans by increasing competition -- this won't happen unless a substantial number of patients put pressure on insurers by choosing to move between plans pretty often.

Hattie: I too am on Kaiser though a happy accident; a past employer got me started with them. This sort of managed care works well for me. I especially like that their electronic medical records system really seems to work. Docs can see all my past history immediately.

We have been with an HMO since the option became available. Our is through a clinic but works the same as Kaiser or did until Medicare and Advantage. I guess now there are other options for going to specialists. I still like the primary care doctor and having all the testing etc in the same complex. Years ago when I needed to have a hysterectomy, I did get a second opinion outside the clinic which I had to pay for. I felt it was worth it. Now I think I could get that second opinion and not have that happen and ACA is why. I've had both independent practitioners and the HMO. They each have their appeal but HMO was always less expensive and seemed more effective to me. Kaiser would require a 50 mile each way drive; so it wasn't something we seriously considered.

I also wish we had gone to single payer, Medicare for all with the option to buy extra coverage as we on Medicare have now. I don't think with the blue dog dems, Obama could have gotten it through. Now we'll be lucky to keep any of it with the repubs in control of Congress :(. Obama was trying to have it both ways with keeping insurance profitable. It's a middle man that actually does nothing for us but just sucks out money.