A good result amidst the bloodbath 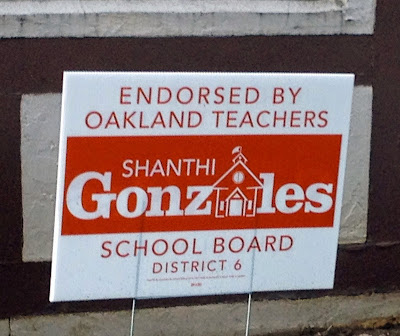 Shanthi Gonzales was handily elected to the thankless post of member of the Oakland School Board from District 6 yesterday. She won the old fashioned way: she talked with every voter she could find for six months; she won endorsements from organizations that care about the schools, especially the teacher's union; and she rallied her friends and neighbors to spread the word about her to voters. There wasn't any big money in this one, so she took it with nearly 60 percent of the vote.

Why do I care? Because I've known Shanthi ever since she was a young person in public school campaigning to push back against the wave of racist state initiatives in California in mid-1990s. (California looked more like North Carolina and Georgia do today in those days than we wish to remember, suffering election after election driven by older white voters' fear of demographic change.)

Now she gets to try to make some of our suffering public schools work.
Posted by janinsanfran at 8:20 AM