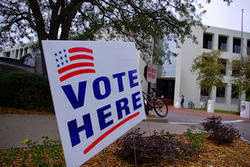 On this nasty election night, it seems appropriate to share my friend Sarah Lazare's insightful piece from Common Dreams:

In an election marked by record outside spending, including "dark money" sources, a clear winner has already emerged: the corporate television stations making windfall profits from political advertising.

Cable news stations have nearly doubled their sales in political ads since the last midterm elections in 2010, according to figures from Kanta Media ad tracking firm, which were provided to Reuters. TV stations across the U.S. will bring in approximately $2.4 billion from local, state, and federal elections ads, they report. These numbers are just slightly behind the 2012 presidential election, which saw $2.9 billion spent on TV ads.

A recent Pew Research poll finds that, for local TV stations—which remain one of the sources people in the U.S. depend on most for their political news—the 2014 elections could turn out to be one of the most profitable ever.

According to Cecilia Kang and Matea Gold writing for the Washington Post: "This year’s deluge of political ads is being driven largely by super PACs and other independent groups seeking to shape the hard-fought battle over control of the U.S. Senate."

An estimated 908,000 TV ads regarding the U.S. Senate elections aired through late October, the Center for Public Integrity reports. In seven key Senate races, dark money groups are behind 20 percent of all TV ads. A new analysis by the Wesleyan Media Project finds that only 26 percent of these Senate ads are positive.

Michael Beckel, reporter at the Center for Public Integrity, told Common Dreams that the 2010 Citizens United ruling was a "game changer" for political campaign spending. "That ruling has enabled non-party groups to become ever more prominent and we have seen a proliferation of super PACs and politically active nonprofits that endorse candidates and sling mud in attack ads. This election is on pace to be most expensive midterm in history."

TV stations are mandated to offer candidates their lowest rates, but the same rule does not apply for outside organizations. Therefore, the proliferation of super PACs is boosting profits, because TV stations can charge them more for their ads. "Some news stations have been airing additional news programs in order sell more ads," said Beckel. "Selling political ads has been very lucrative."

Ahead of the 2014 elections, media companies bought up local stations, anticipating these windfall profits. This resulted in "massive" media consolidation, contributing to the national trend of growing conglomerates and a "narrowing" news perspective, argues Reed Richardson in the Nation.

"To elect our nation’s leaders, wealthy 1-percenters and mega-corporations have been given carte blanche to secretly fund organizations that spend obscene amounts of money advertising on TV stations owned by other mega-corporations and wealthy 1-percenters," writes Richardson. "In short, our political finance system has become little more than an income redistribution model for the ultra-rich and a no-lose proposition for big media corporations."

This work is licensed under a Creative Commons Attribution-Share Alike 3.0 License

I suspect, when the dust settles that careful students of elections will discover that television advertising has declining importance in determining winners and losers. The medium is losing its dominance. Concurrently, there is so much money floating around that well-financed campaigns can run out of useful things to do with it.

But for both political consultants and broadcasters, this is where the easy profits are to be found.
Posted by janinsanfran at 5:31 PM