Getting our fears in order

The United States really did have a crime wave during the 1980s. There were more assaults, more burglaries, more stranger murders (most murders were committed by people known to the victim, even then, but you get the idea.) The crime wave peaked in 1991. The incidence of these frightening crimes has been falling ever since.

The number of violent crimes has fallen by 32% since 1990 across America as a whole; in the biggest cities, it has fallen by 64%. ... The number of people behind bars has grown substantially in many countries over the past 20 years. ...Prison takes existing criminals off the streets. But in many places, the drop in crime seems to be down to people not becoming criminals in the first place. ...

There are lots of theories about why this happened: the linked article is partial to the idea that most businesses now use better burglar alarms; I am impressed by the thesis that a whole cohort of young people suffered low-level lead poisoning that messed with impulse control.

Some places, especially California, responded to the crime wave by locking up people convicted of minor offenses and throwing away the keys. Politicians competed to be "tough on crime." We ended up with too many dangerous, overcrowded prisons; communities where most of a generation of young men of color were rendered unemployable and unmarriageable outcasts; and unsustainable state and local expenses for incarceration.

This year's Prop. 47 aims to put the state on a different, more realistic, path. According to the New York Times:

Under Proposition 47, many low-level drug and property offenses — like shoplifting, writing bad checks or simple drug possession — would be converted from felonies to misdemeanors.

That would cut an average of about a year off the sentences of up to 10,000 inmates, potentially saving the state hundreds of millions of dollars annually. To keep people from returning to prison, or from going in the first place, the savings would be invested in anti-truancy efforts and other programs like mental health and drug-abuse treatment. Some would go to victims’ services, a perennially underfinanced part of the justice system.

Prop. 47 makes sense to me. We overreacted to a few spectacular atrocities then; we can act more sensibly now.

Concurrently, I am intrigued by this chart from Vox: 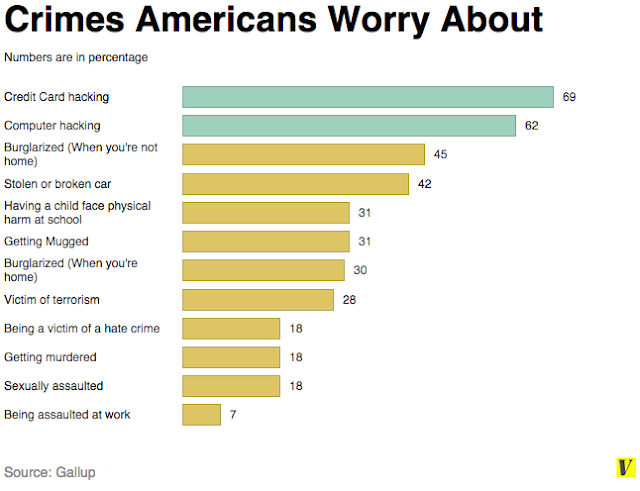 Some of these fears seem to me to make sense -- others seem wildly unrealistic. I share the fear of my credit card being hacked, not so much because of losing money (the issuers are good about refunding losses) but because of the enormous nuisance involved in resetting all the automated payments I use.

I'm not sure what people mean by fearing computer hacking: if this means that cyber-warfare could bring down our entire economic infrastructure, I'm on board with this. (And distrustful that our "security" apparatus is on the job.) If it means that someone will hack my computer, I'm not so worried: the social networks I participate in spread my "voluntarily" surrendered information far and wide every day. We seem to have chosen to live with this as a society; presumably we'll somehow find a balance.

I'll cop to being concerned about a break-in to car or house. Both have happened here.

I am not a bit worried about being a victim of terrorism. Could happen, but the likelihood is vanishingly small; that goes double for invasive tropical diseases. We need to grow up and learn to live with these as miniscule background risks.

The items in the 18 percent category -- hate crime, murder, sexual assault -- probably aren't nearly as likely as we fear, but the consequences are so devastating that it isn't crazy to be slightly concerned about them. It is no advertisement for the social conditions that we tolerate that we have to fear these at all. This is not part of the human condition!

Not on this list, but as little controllable as most items on it, I'm afraid of "natural disasters"-- some human-influenced, some not (think earthquake) -- that could completely upend the life I lead and the city in which I live it.

Where do you put your fears?
Posted by janinsanfran at 7:43 AM