Reflections on law and U.S. history 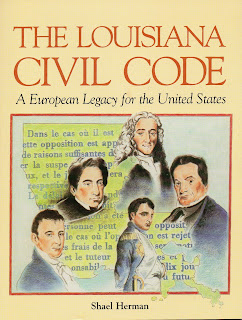 It turns out Louisiana -- and thus New Orleans -- really is different. During the bookapalooza, Rebecca spoke at the law school at Loyola. Our hosts gave us a strange little gift -- it looks almost like a children's book -- from the Louisiana Bar Foundation.

So I actually read it. Apparently the civil law in the Bayou State is

almost as different from the rest of American law as the metric system is from the English system of measurement.

Because of its French history, the state has inherited a Civil Code that expressed the drive of the French bourgeoisie to upend and replace all vestiges of feudal and religious ordinances that encumbered private property. That's one way of describing what the French Revolution of 1789 was all about. By the time an embattled France sold off Louisiana to President Thomas Jefferson in 1803, a civil code expressing the bourgeoisie's optimistic rationalism had become the region's law. Proponents of this sort of Code, called "civilians" in this little book, look to statutes to deduce and order how citizens (male property owners, really) ought to organize their affairs. The rest of U.S. law which derives from the English common law tradition, building a frame for legal behavior inductively out of accumulated generations of particular instances or "cases."

The civilians' debate with common lawyers about the best way to make law reflects their antithetical assumptions about the power of generalized rules over men's lives. These assumptions, in turn, are linked to the civilian's preference for deduction and the common lawyer's attachment to induction as ways of reasoning about legal issues. The civilian, unless he assumed that the code stated generally valid standards, could not deduce a result by manipulating its provisions. By contrast, a common lawyer would not bother with close analysis of individual precedents if he thought their meaning could be captured for all time in a terse code provision. The differing assumptions about the power of inductive and deductive reasoning are linked to contrasting assumptions about the unfolding of history. As we have noted already, a civilian must believe that history is orderly enough to permit terse generalization. A common lawyer is much less confident than his civilian counterpart about the predictability of history.

Most of us are so steeped in a world shaped by the common law's assumptions that utilitarianism and pragmatism come naturally. Might this be a different country if the ideological assumptions of the Code Civil -- the belief that legislators can prescribe a right society -- had shaped our laws?
Posted by janinsanfran at 5:00 AM