This is a bet on the economy .. 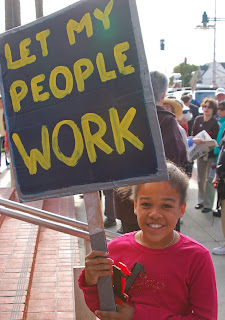 Let me jump into the risky and foolish prediction business. I read a lot of commentary on the President's order to give a substantial number (4 million? -- we won't really know for awhile) of our undocumented population a deferred deportation status. Watching the capricious and cruel workings of immigration law in our neighborhood, I could only cheer and wish for more, the more that Congress could give but Republicans won't.

There's lots of wailing and fury in response from some people. There will be more of this. Maybe Republicans will shut down the government over giving work permits to parents of citizens? Seems crazy, but we could go there.

But whether this action seems more than a blip in our memory of this period will depend on something that neither President Obama nor the Republicans seem to have (or want?) much of a grip on. If the weak economic growth currently underway leads to growing perceptions of prosperity for a majority of us, this immigration initiative will be forgotten. If, as has been the case for more than a decade, the promised economic improvement never comes, maybe Obama will go down in history as an aspiring tyrant, oblivious to the constraints of law.

It's still about the economy, stupid!
Posted by janinsanfran at 8:22 AM

I don't know how history will see him but I think he did the right thing and it's not the momentous action the right wing is trying to paint it. Work permits and allowing people to freely move between the countries would probably help a lot as not all Mexicans up here want to move here. Some just want the better paying jobs.

Some states, like Oregon, already are not trying to deport anybody unless they have committed a criminal act.

What I read is that Congress won't support massive deportations for their cost and so it's been haphazard. We will never have the right though agreeing on anything he does. They have blocked meaningful action and by doing that, they've hamstrung the government which apparently is what some voters want. grrrrrr