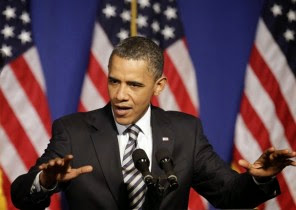 The Prez is sending more U.S. troops into harm's way in Iraq. What's he going to do when someone blows them up? For that matter, do we even have a clear enough understanding of who is friend and who is foe to figure out who the bomber was?

WASHINGTON (AP) — President Barack Obama is authorizing the U.S. military to deploy up to 1,500 more troops to Iraq as part of the mission to combat the Islamic State group. ...

The White House says the troops won't serve in a combat role, but will train, advise and assist Iraqi military and Kurdish forces fighting IS.

White House press secretary Josh Earnest says Obama has also authorized the additional personnel to operate at Iraqi military facilities outside Baghdad and Erbil. Until now, U.S. troops have been operating a joint operation center setup with Iraqi forces there.

Last thing the guy needs is another war; he's already got one in Washington.
Posted by janinsanfran at 5:00 AM