Equality then and now 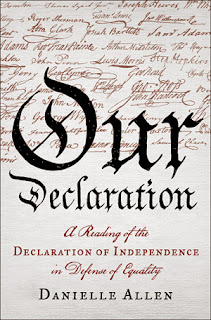 Our Declaration by Danielle Allen, a professor of social science at the Institute for Advanced Study in Princeton, New Jersey, has been sitting next to my computer for a month, reminding me to write about it. Something held me back. What?

I reveled in this book -- I highly recommend it -- yet I'm conflicted because it did not quite succeed at convincing me that the Declaration of Independence should be read as a ringing endorsement of human equality. (I have linked to the document's text because, as Allen points out, most of us have never read the entirety of this short document; we invoke it, but our education seldom includes reading it.)

Allen acquired her understanding of the Declaration through teaching and discussing it with University of Chicago students and adult, working, night students. Their discussions formed her vision of what this founding document might mean to us today.

By and large all we were doing was reading texts closely, and discussing them. ...

As I worked my way through the text with those students, I realized for the first time in my own life that the Declaration makes a coherent philosophical argument. In particular, it makes an argument about political equality. ... What exactly is political equality? The purpose of democracy is to empower individual citizens and give them sufficient control over their lives to protect themselves from domination. In their ideal form, democracies empower each and all such that none can dominate any of the others, nor anyone group, another group of citizens.

Ideally, if political equality exists, citizens become co-creators of their shared world. Freedom from domination and the opportunity for co-creation maximize the space available for individual and collective flourishing. ...

As a mixed-race woman, Allen is perfectly well aware that the Declaration's authors -- John Adams, Thomas Jefferson, the other propertied gentlemen of the Continental Congress -- could not envision freedom or equality that included her. Yet she is certain that their creation -- their collective "democratic writing" -- nonetheless speaks philosophical truths that go beyond their particular circumstances and very much to include all of us.

I just can't follow Allen to this conclusion. By instinct and by education, I think like an historian, determined to understand as much as possible the context that shaped a document from the past in its particular time. The past was then; this is now. My thought emerges from now and it is through the vantage point of now that I see the past. Knowing this, I deeply distrust my own instinct to assimilate the actions and thinking of people in the past into my contemporary reality.

Allen is a philosopher; she looks for the principles that undergird the temporal particularity of the Declaration.

Although the study of history is riveting and awakens us to contingency, this book treads lightly on the historical side of the tale of the Declaration. While history can serve to help us understand many things much better it can also function as a barrier to entry. This book is intentionally philosophical; it focuses almost exclusively on the logical argument of the Declaration and the conceptual terrain of its metaphors.

And so, for her, the Declaration becomes a grand testimony to equality.

The Declaration of Independence makes a coherent philosophical argument from start to finish. it is this: equality has precedence over freedom; only on the basis of equality can freedom be securely achieved.

I want to believe her, but I can't locate this insight in the Declaration. I can agree with the conclusion here, but I have to get there through the struggles of my own time, not through this more than 200 year old document. Fortunately, no time lacks struggles toward justice for all, if we dare to see them.

After researching women's rights which took up until 1920 for us to have the right to vote for a President, I agree with you on this one.

(Have to add as I try to get this through a now third time, the word verification is terrible, impossible to read some of the letters and have to guess!)

Just some easy to read house numbers here????
This may seem off track,but I remember a class I took in cultural studies where we discussed opposing notions of human nature,one postulating a universal human nature,that is that beneath the superficialities we are all the same and another that human nature is highly malleable. Americans in general believe the former, the Japanese,say,believe the latter. Or so my professor said. Apply this idea to the authors of the Declaration of Independence,giving it a historical dimension and it becomes clear to me that we can easily overstate their resemblance to us present day Americans.